Tasting notes:
A single malt! Five decades! Whomsoever is dreaming up new drams at Glen Grant deserves a raise, or at least, a raised glass for the sheerness of the conceit.
Lifting my glass to my nose, it’s manky, scurfy, turfy: a recreation of a thatched-roof bronze-age mud house constructed by artisanal anthropologists as a lark while vacationing at Pitcairn Island. A bunch of feral cats have taken up residence, and as they have easy egress and impeccable habits, it’s like a crazy cat lady with genetically modified kittens that simply never excrete anything at all. (They don’t last long, those hypothetical GMO kittens; they swell up like over-inflated soccer balls and then expire before bursting.) Prune pies jostle elbows on the window sill with fig newtons, piping hot from the AGA cooker, and an ultra-caramelized lime meringue confection from the travel sous vide. Inside is also a wax bowl with wooden fruit or perhaps a wooden bowl with wax mangoes—but definitely not wax bananas. Perfectly preserved velvet pantaloons taken from a recently unearthed cedar trunk of a fop: They are old, but not musty. Blowing like a shofar in the distance is a plastic conch shell being gently undulated by a graduate student hoping to enact a modern version of an ancient fertility rite.
On the mouth, light apricot syrup drizzling over a buttermilk biscuit like flop sweat flying off of a nervous ballerina coerced into a command performance for the Czarina. Writing with a quill on parchment made from Rice Krispies™ with ink made from ground-up snail shells, burnt siena crayons, and the suave calm of Alex Trebek as he says, “In the form of a question, please.” There’s a two-way canal in the Glass City of Dreams, Marco Polo’s Venice, a bidirectional, a polyamorous head-fake between the nose and the mouth, almost as if it got lost in Tom Selleck’s mustache while he was screaming, “Floral Speyside! What distillery are you??” 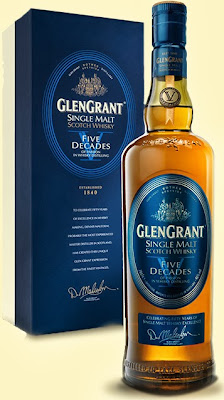 The finish refuses to finish. It’s ongoing even now, three hours later, like the faint echoes that ghostologists and para-investigators claim to be able to sense; disturbances in the aether that are soothing and speak of hot nights, cool jazz, and immoderate consumption. It’s Serenity in a bottle! It’s a new shiatsu technique for the tongue developed in Northern California at the Esalen Institute with research funded by a grant from Larry Ellison! It’s like a BMW Series 5 bucket seat abductor massage eliminating the need for a trip to a chiropractor!
The finish just keeps going…balloons painted with lacquer and gesso, then popped when they’re dry in a piece of perforation art. Strawberry shell for blackberry ice cream. And adding water?  Drops of caramel sprayed by a produce-mister onto the cauliflower at locavore store. Butterscotch ice cream larded with hot fudge sauce made from broken bits of 82% cacoa Scharffen Berger chocolate that goes off with a full-throated “Kapow!” followed by “Eat it!” and then licks your ear. You deserve this.

Rating:
–On the scale of experiments that refuse to finish–
The Glen Grant Five Decades is the pitch drop experiment at the University of Queensland in Brisbane, Australia–It was begun in 1927, and the goal was to measure the viscosity of pitch. Now, 86 years later, a total of eight drops have fallen from the funnel, leading to the calculation that pitch has approximately 230 billion times the viscosity of water. That sort of patience is reflected, inversely, as if in a fun house mirror, by my drinking 86 drops of the Glen Grant Five Decades in eight seconds. This suggests to me that the water of life of the GGFD, as I affectionately call it, has 230 billion times the drinkosity of plain water. Bartender, pour me another 230 billion drops!

–Our thanks to Nick Rotondi, Exposure USA, and Glen Grant for the sample!