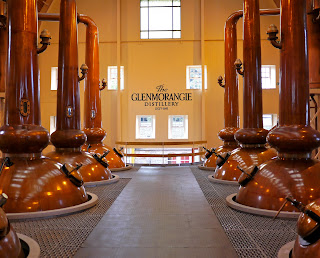 We have loved Glenmorangie for a good while now, so once we decided that we would go north of Inverness on this trip, visiting Glenmorangie was a given.  I drove the rented Maltmobile the 2+ hours from Gill’s Bay, where our ferry from Orkney landed, to Glenmorangie.  Thanks to the ferry having been delayed, I had to haul it.  We made it just in time for our tour with Annette MacKenzie, the Visitor Centre Manager.  It was a good thing I still had adrenaline in my system from the drive, because Annette hit the ground running, her incredible energy barely held in check by her big smile.  Annette has worked at Glenmorangie for nearly two decades and has family in the business as well, but that level of experience and exposure to the whisky industry cannot account for the sheer volume of information she had at the tip of her tongue nor the easy familiarity she had with all things Glenmorangie.  She seemed to be more at home there than she would have been at her house, which left me with the impression that the terms “committed to” or “invested in” would grossly understate Annette’s relationship to Glenmorangie.  We’ve written about it in many small ways through the years, but the most wonderful and appealing aspect of the whisky industry is the people who work in it, and Annette only underscored that fact for us.

Among the many facts Annette relayed to us about Glenmorangie, what follows here are the most notable and those that best explain at least part of what makes Glenmorangie unique.  For one, the site of the distillery was once the site of a popular brewery, with whisky distilling beginning there in the 1840s.  And as we all know, you can’t have great whisky without great beer.  OK, for those of you who have drunk the wash from your average fermentation tank, make that “without beer.”
“Glenmorangie” means “Glen (or valley) of Big Peace” or “Glen of Tranquility.”  It is a tranquil location, to be sure, though I was anything but calm as we walked into the warehouses, where we had the opportunity to try Glenmorangie whiskies straight from a Bourbon cask, a Port pipe, and a Sauternes cask.  Actually, to her credit, Annette let us have very little and encouraged us mostly to smell, given that we had a tasting set up after the tour.  And she was glad to hear that I was driving the three of us to Inverness afterwards and that I was going to have very little as a result. 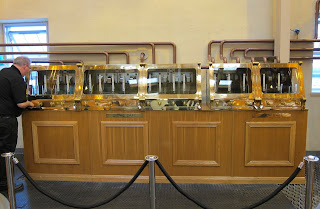 Glenmorangie’s production is huge, clocking in at 4.2 million litres of spirit per year.  That was a fact that I didn’t quite get my head around right away.  One thing that helped me do that was Annette’s telling us that in the process of bringing production up to current levels, they cut the mash time from 8.5 hours to 5.  Another was that later when I was looking through our photographs from the trip, I realized that Glenmorangie’s spirit safe was easily twice the size of any others we saw this time around.  That’s nuts.  And awesome. 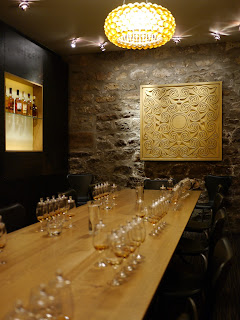 Glenmorangie’s stills, at 16 feet high, are the tallest in Scotland.  They are the height of an adult giraffe and accordingly have been likened to giraffes (“Why not ferrets?” Bill wanted to know).  With necks that long, it’s impossible not to get a light, refined spirit.  And it’s that light, refined spirit that allows Dr. Bill Lumsden, Head of Distilling and Whisky Creation at the Glenmorangie Company, to do so many interesting finishes and experiments with exotic casks: that spirit can take on the extra maturation and showcase the additional flavors without clouding the profile with too many competing flavors.
Our tasting took place in the Signet Room, a sharply, even slickly, decorated space adorned with art by Barry Grove.  I’m not proud to say this, but before visiting Glenmorangie, I didn’t know who Barry Grove was.  Actually, I didn’t know who Barry Grove the sculptor was.  I grew up with this guy named Barry Grove, whom we called Barry Bag o’ Hammers, because his father owned a hardware store and because he was kinda dumpy (kids can be so cruel).  While a sculptor uses hammers, I was pretty sure this wasn’t the same guy, and it turns out I was right.  But I digress. 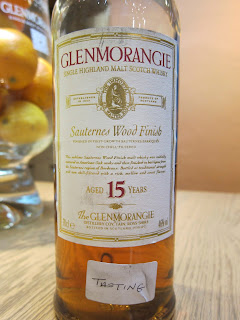 The Glenmo flight Annette presented to us included her “wee slurping bottle” (the Original), the LaSanta, the Quinta Ruban, the Nectar D’Or, the glorious 18 (one of my personal favorites–of all whiskies), and the superlative 25.  I sipped my 18 and nosed my 25 since, as I mentioned, I was the designated driver that day.  Meanwhile, as Bill raved about the 25, Annette poured her glass of it into Bill’s glass.  This act cemented Bill’s undying love for Annette in much the same way that giving high end treats to a dog engenders loyalty and affection.  This also explains Bill’s panting and John hitting him with a rolled up copy of Unfiltered.
Finally, we ended up back in the Visitor Centre, where we tried the 15 Year-Old Sauternes Cask and were given samples of the Cask Master’s selections so that we could cast our votes (Our pick won!  More on that soon.).  The Visitor Centre staff, led by Annette, were kind enough to pose with the Grouchos for us, a fitting end to a fantastic distillery visit.  Glenmorangie whiskies are top-quality, and the company innovates in the best kinds of ways, but at the end of the day, it’s the people that make the difference between great whisky and something you love.  And people who are more than willing to don the Grouchos for a trio of strangers…well, those are most certainly our kind of people. 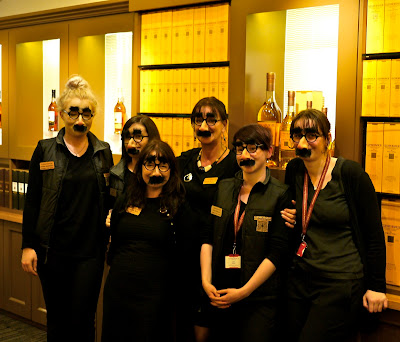