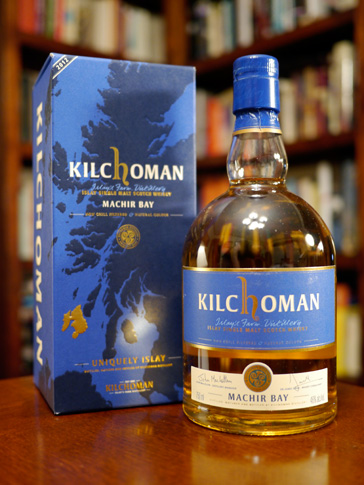 Tasting notes:
The Kilchoman Machir Bay 2013 edition. Nosing like a fiery-spirited mustang that’s been rolling around and kicking up its heels on a grassy oasis in a hidden valley in Utah, the stallion suddenly pauses, ears proudly erect, eyes alert, and body stiffened at the new scent infilitrating its haven. It’s smoke; smoke and peat. The tail flicks once, twice, thrice: Will the stallion bolt? Luxuriate? Burnt toast, old denim overalls with brass buttons, the dried sweat of honest laborers, and the crumpled lottery ticket soon to claim a $500 jackpot.
Classic Islay on the mouth, slowly yielding to anise-seeded sausage on burnt-end pork horseradish white sauce thin-crust flatbread pizza. Hints of cilantro and the righteous fury of a jilted bride whose fiancé ran off with the caterer AND the organist. (Oh, what a tangled web, etc.) A Kickstarter project earning triple the goal in half the time. The languorous wink of Eva Longoria at a waiter bearing langoustines in Lyons.
Finishing in time for breakfast, or really, any meal, with the slow burn of a judge increasingly annoyed at the histrionics of a lawyer playing to the jury. It fills the mouth leaving no room for chance and no space on a young woman’s dance card. It mounts like a bounding mountain goat clambering up crags, desiring nothing more than the ecstasy of height and the emptiness of the surrounding atmosphere. If the mountain goat could laugh, what a laugh it would laugh now.

–On the scale of Pixar movies–
The Kilchoman Machir Bay 2013 is Finding Nemo–You think at first that it’s the tale of Nemo finding himself, finding courage, finding understanding of his dad, but then you realize that the true story is of Marlin’s acceptance that the journey of life is the journey of children away from the parents. How brave of Marlin, and how brave of Kilchoman, to genie-out-of-the-bottle allow their scions out into the world.
–Bill