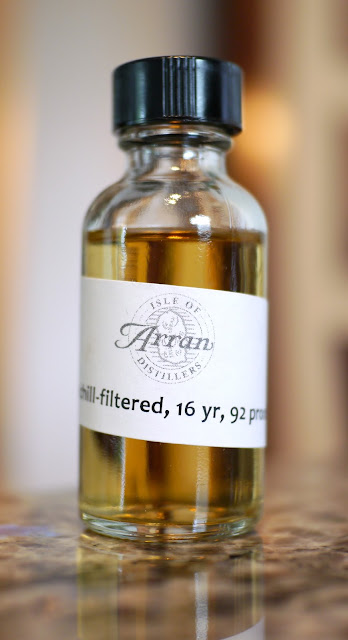 Tasting notes:
The Arran 16 year old nose is simultaneously understated and spilling over the brim of the glass like the rolling clouds of a stereotypical hunk-of-dry-ice-in-water brew in a witch’s goblet. Acorn paste spread on crostini using Humboldt fog cheese rather than a goat cheese, Svetlana’s infamous lingonberry and slivovitz tart, and Eric Clapton’s unreleased album Blackthorn Sloe Hand. Must on a gunstock. Dust on ginger-root. Fust on Johann’s printing press, and lust eliciting John’s disapprovingly pursed lips.

[Stephen: Dare I ask about “Svetlana”?]

On the mouth, a maple wood cradle long outgrown by boisterous and rambunctious two-year old twins. Saffron-scented sheets. The shadow of a waxwing slain and marzipan fish scales. Double toffee, being a combination of normal toffee and the portmanteau constructed from Tremendous cOFFEE. Autumn leaves and April showers. Finishing with long, slow, drawn-out baaaaaannnnnngggggg AND a whimper of What strange new land do I found myself in? Where are the tomorrows of our yesterdays?

[John: Bill, have you been taking your meds?]

The finish is like the essence of the fruit flavors clinging to the softened almost gelatinous white stick of a lollipop. It’s comforting, surprisingly, and an invocation of past glories, childhood nostalgia, and Rainbow Mayonnaise. (Yes, that last was for you, Jackie, just in case you read our non-Ardbeg posts.) Honey molasses spread on pumpernickel bread with a vintage Wallace sterling silver butter knife, where the patina was the oxidized love of a grandmother for her granddaughters.

–On the scale of adolescent milestones–
The Arran 16 year old is passing the driver’s test and being issued your first license–Look out world! Another driver, seizing the wheel, commanding destiny, taking younger siblings to the mall, and maybe, just maybe, engaging in a bit of back-seat necking.