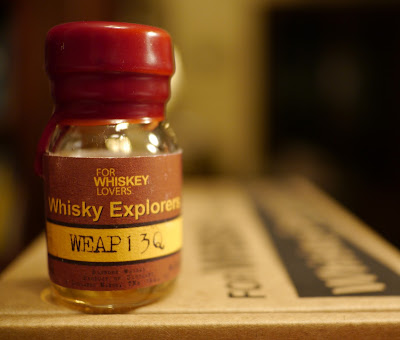 The April edition of the Whiskey Explorers Club sat on my desk for a long time, and I left it there for many reasons, none of them very good ones.  I was traveling with John and Bill early in the summer, and it was crazy pushing through until we left; it was hell finding Bill a good ferret-sitter; John needed help finding his temporarily misplaced moralism–you know, typical kind of stuff.  OK, the last one is obviously false, but you get the idea. No good excuses there, so my apologies to Doug Stone for taking so long to say anything at all about the last flight from the WEC.  To his credit, though, Doug has never asked anything in particular of us with respect to our writing about our experiences with the WEC, though we assume he’d prefer we write something rather than nothing.

After a trial run on the first iteration of WEC, we’ve tended not to reveal what’s in the flights, focusing instead more on how Doug Stone (who is the Founder and CEO of ForWhiskeyLovers.com) had been changing and improving the experience.  Early on, we came to think of revealing what’s in the flights as jerk behavior, spoiling the surprise for others.  Now, I think we see it differently: the value of the blind tasting is something to be protected.  The WEC provides members with the opportunity to taste a variety of different whiskies or whiskeys and to nose and look at and taste them on their own merits, detached from a great label or a sexy bottle or an age statement.  And let me tell you, it gives you a great perspective on whisky and whiskey to taste blind.  In fact, in this last flight were a couple of expressions I knew well but couldn’t recognize easily.  In part, that was because I found notes and flavors I didn’t remember in them from before, and I’m quite sure that my attention to these notes and flavors came from the fact that I was tasting blind.

It’s humbling to get the expression wrong when you’ve known it well and you have a one in five chance of guessing it.  But that just goes to show what your knowledge of what you’re drinking affects your subjective experience of it.  Not that there’s anything wrong with that, mind you: the whole experience of drinking whisky is rather subjective, but it’s good to blindfold your subjectivity a bit here and there and make your nose and your tongue and your eyes do the work on the liquid and only on the liquid.

Think of it as training.

You could probably stand to get in better shape.