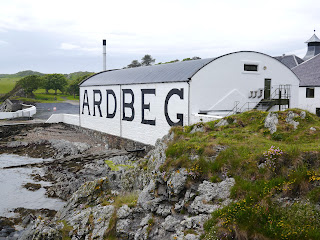 We’d spent the morning at Bruichladdich, and at the end, Jim McEwan had been holding court.  We didn’t want to leave, but we were on an important mission: Someone—some trio—had to review the lunch feast at the Old Kiln Café at the Ardbeg Distillery. We were the team to do it. Jim finished his string of alternately hilarious and moving tales, Stephen blew another kiss to his cask [more on all that later], and we leapt into our (rented) MaltMobile. 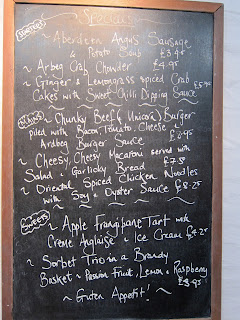 Arriving at Ardbeg: Our first impressions were good. Entering the main hall showed a bar to the left and another opening to the right that revealed an airy room that housed the Ardbeg gift shop and the café. This was a classic café.  The chalked specials informed all readers that Chunky Beef + Unicorn burgers were to be had, and we were eager to be seated. On the way to our seats, I asked if the Chunky Beef + Unicorn burger came with rainbow mayonnaise. The hostess chuckled bemusedly in response, but I was undeterred, as per my usual.
Jackie Thomson, the Ardbeg Visitor Centre Manager, who really gets around, seated us. (No, I didn’t mean “get around” like that! Get your mind out of the gutter! I meant that she’s quoted in the summer 2013 issue of Whisky Advocate as taking “fast boats” to pop over to Ireland for the night, AND when we visited Glenmorangie, Annette Mackenzie, the Visitor Centre Manager there [more on that later, too], asked after Jackie.) We ordered a varied menu, eager to sample the many offerings.
As for the soups, there were two. Your reviewer couldn’t say no to the Aberdeen Angus Sausage and Potato soup, so he said yes. It was balanced beautifully; the broken starches of the potato suffused the broth until it was as if a delicate cream surrounded—but did not engulf—the succulent sausage. It came neither boiling hot nor unduly temperate; it was perfect. Stephen and John both ordered the Ardbeg Crab Chowder, and while its spices tantalized like Josephine Baker, my soup was clearly superior, and I smirked through the whole course. Although, since I smirk a lot, maybe I would have smirked anyways. 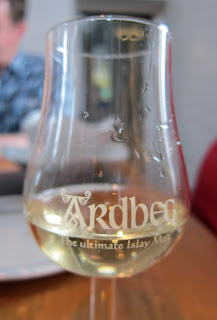 The Ardbeg Supernova 2010 turned out to be the perfect complement to the food. That and two Islay Ales (thanks, Jackie). And whereas a particular waitress took our orders, it became clear that the entire staff floated around the room, sharks scenting blood, looking for customers whose water glasses were low, whose bread basket was depleted, whose dishes were cleaned, who looked to be inquiring or in any way amiss—John’s perpetual expression, I’m afraid—and brought crisp service and cheerful smiles. Two of the staff in particular singled us out: Christie-with-a-y and Jacks. Note: “Jacks” is really “Jackie,” but a different “Jackie” than the “Jackie” who gets around.

Oh, I thought “Christie-with-a-y” was an odd name. Thanks, Stephen.

Oh, I thought that was an unusual spelling of a name, but I just wrote down what you said: Christie-with-a-y. Anyways, Chrystie was notable for the way she chaffed Stephen about the site…

Oh, for Pete’s sake! Do you want to write this review, Stephen??? Do you??? Fine, I’ll change it: Christy–as in Christ with a “y”–with a “y” in the right place, which sounds vaguely wrong, could have been auditioning for the role of the super-sassy super-competent sitcom waitress. But really, anyone who chaffs Stephen is aces in my book.
Back to the food: I ordered a bacon, brie, and onion chutney-with-a-y panini, because I am me and couldn’t order otherwise. It was sublime: The heated press branded the fresh-baked bread like Sir Edmund Hilary’s crampons indenting the top of Mt. Everest. The onion chutney-with-a-y was just the right amount of vinegar and bulbous onion-ness, the brie melty-with-a-y, and the bacon was delicious. I tasted the Chunky Beef + Unicorn Burger, and I must say, the Unicorn added a rich, earthy-with-a-y flavour, and it was wholly fantastic. John got the SBLT, which was a smoky bacon, lettuce, and tomato.  Unfortunately, that’s all I know of it, as it was not with us long at all.
As with most any meal, though, the memorable part was the dessert. [John: Said the hedonist.] We pondered sharing just one, then pondered sharing two. We spoke of our dilemma to Jacks-without-a-y, aka Jacks, and she inquired as to what we were contemplating. We told her the Apple Frangipane Tart with Creme Anglais and Ice Cream, because it sounded delicious, the Sticky Toffee Pudding, because it’s named after the famous Rolling Stones album, and the Clootie Dumpling, because, well, “Clootie Dumpling.” Jacks gazed at us pityingly, then said tartly, “You’re mature men! Order all three!” There was no way to do otherwise, since we’d never before been accused of being mature. [Stephen: Bill! The Stones album is “Sticky Fingers”!]
The Apple Frangipane Tart with Creme Anglais and Ice Cream was the first to go. After pretending he was full, after appealing to his youthful figure, John dug in like Joey Chestnut mowing down a stack of hot dogs. Stephen and I would have done a few double-takes for comic relief, except (a) no-one was looking; and, (b) John would have eaten the whole thing. The Clootie Dumpling was, as advertised, more than a bit like the excellent fruitcake that you imagined must exist, but that your aunt and uncle always ate themselves rather than sending on to you. Savoury-with-a-y, spicy-with-a-y, moist and rich, fruity-with-a-y, it satisfied urges that we hadn’t known existed.

Finally, the Sticky-with-a-y Toffee Pudding. I will quote a noted thespian and critic for this, if you’ll pardon my deference to keener intellect: Keanu Reeves says, “Whoa.” Really, there’s nothing more to be said.

OK, yes there is.

Really, the toffee pudding was insane: imagine a filet mignon made from fudge-fattened toffee-cows, and you’ll get close. 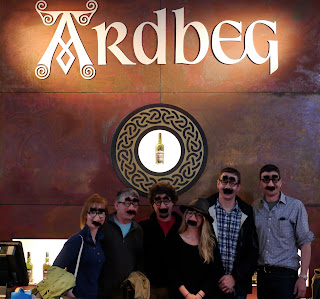 Undaunted by the spectacle that was that first photo-op, Jackie who gets around and Christ with a y stepped up to be next in line for Grouchos photos.  But there was an extra pair of Grouchos unclaimed by Jacks (was she on a break? did she step into an alternate universe for a moment to help corral the unicorns?), so we settled for getting Distillery Manager Mickey Heads in there instead.  Actually, for someone drafted at the last moment into having his picture taken whilst wearing Groucho Marx glasses, Mickey was remarkably affable and gracious about the whole thing. 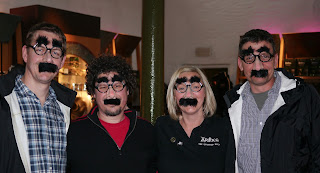 But we could not leave without getting a picture with the woman who was responsible for orchestrating the culinary coup de grâce at the end of our extraordinary meal.  As if from some astral plane where only unicorns and John’s daughter’s dreams reside, Jacks reappeared.  And before she knew what hit her, we had her posing with us and the Grouchos.  What a woman!  What desserts! What a lovely sugar coma afterwards!

Again, even though we’re not in the habit of giving distillery visits ratings, this wasn’t a distillery visit, so it’s okay.  On the scale of scales, the Old Kiln Café at Arbeg is the Celsius–You go from freezing to boiling in a mere 100 tiny steps, and the food there is stone cold awesome, and the staff as warm and friendly as ever you’ll meet.