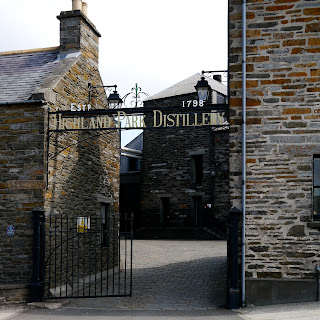 Let’s be clear. When we met Steph Ridgway, she was kind enough to pour us a sample of Highland Park 25, which naturally endeared her to us. We talked with her about all things Highland Park, and she spoke of the specialness of Orkney Island and its inhabitants, the Orcadians. Indeed, she was so moved while describing it, she literally was overcome by memory (and by our overwhelming Impostorly presence, or so I’d like to believe) and fell silent. At the time, I thought it couldn’t be that nice, and I was intrigued to put it to the test.

Everything she hinted at is true.

[Stephen: I just edited about a hundred lines of blank nothingness.  Bill was overcome by memory and his innate Bill-ness.  He evidently kept hitting “Return” over and over again, possibly in a fugue state.  Reader, you’re welcome.] 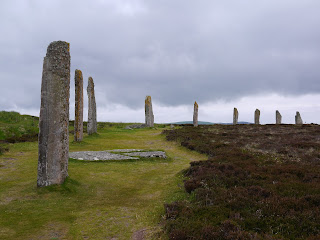 It’s lovely, and the Orcadians are as warm and friendly as any other group of I’ve had the fortune to meet. This includes the ranger/interpreter at the neolithic Ring of Brodgar, who when we announced our intent to dance naked and enact ancient rituals in the center of the stone circle, merely laughed and told us to make sure no one else saw us. But this is a distillery review, not an exploration of the way John reconciles the primal impulses of his inner world with the strictures and morals of 21st century Western society.
Senior Guide Hollie Sinclair, who’d been at Highland Park for seven years, led us on the tour and the tasting. Her keen knowledge illuminated the entire tour as she gamely answered every question we could put to her, including replies to the standard sort of oddball things that occur to us. Well, to be fair, that occur to me, not Stephen and John. 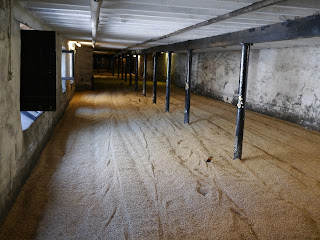 Highland Park is one of six distilleries that do some of their own malting, and their floor was quite long and very narrow compared to the other three that we saw. It looked like an old bowling lane only for people who were able to get considerable velocity on their rolls (of their bowling balls). She told us that often the malt is still turned by hand using the traditional shovels, but that when the crew was running late, they would resort to using variations on the machines we saw at Bowmore. When we noted that if it was our job, we’d somehow always be running late, she said the time difference wasn’t as large as we might think: something like two hours to turn it by hand versus an hour and a quarter with the machine.

The peat kilns weren’t lit at the time, and Hollie catered to our pyromania by setting fire to a piece of younger peat. It smelled heavenly, and she crumbled it a bit to show the heather roots inside. By contrast, the older peat, which was several thousand years older, looked like a lump of coal. According to Hollie, in another few years, it would actually be coal! 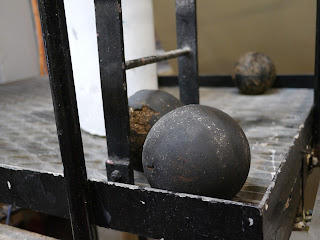 In the room the mash tuns and the fermentation tanks share, we saw something rather curious: several large spheres that looked like cannonballs. We wondered what the cannonballs were used for: perhaps defending the distillery against whisky thieves? Some sort of Viking torture? As with so many things, the real explanation was elegant: the crew puts them into clogged tubes to break up clots. A sort of stent for arteriosclerosis of the mash tun outflow.
In the Still House, we noticed right away the odd upright valves on the stills.  Stephen asked what the valves were for.  It was obvious: the stills were happy to see him.  Boom! 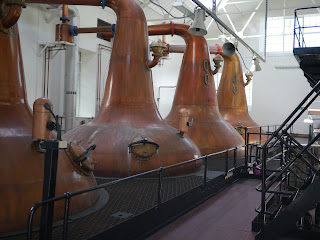 Highland Park and Macallan are both owned by the Edrington Group, and we learned that they spend ten million pounds annually on casks to ensure their quality, an amount Ms. Sinclair said was equal to the amount spent on barrels by the rest of the entire whisky industry. They don’t buy previously used casks; they send lumbered Spanish oak and American oak sections to their cooperage in Spain. There, their coopers make new casks out of the sections. The casks are then conditioned with sherry for two years, and the sherry is used by their partners in Spain. Conditioned casks of both woods were available for sniffing through the bunghole.  While that might not sound like such a great olfactory experience at first blush, it was actually electrifying to smell the difference. The American oak smelled of all the characteristics typically associated Bourbons and Napa Valley Chardonnays (even though it had held sherry and not Bourbon), while the Spanish oaked was redolent with the typically darker flamenco-like sherry notes. Wow!

Then casks are filled with new make fresh from the distillery and warehoused. The 12, 18, and 25 year old expressions are a mixture of 80% Spanish oak and 20% American oak. By contrast, the 15 and 21 year old expressions are 80% American oak and 20% Spanish oak. Learning this was like stumbling around in a dark room, clutching odd objects trying to guess at what they were, and then having an amiable and accommodating friend gradually turn the lights up. Revelatory.
We also learned why Highland Park is called “Highland Park.” I paraphrase here, but it was that the land was higher than Kirkwall and was called a park. It was therefore referred to as “High Park” or “High Land Park.” Boom! 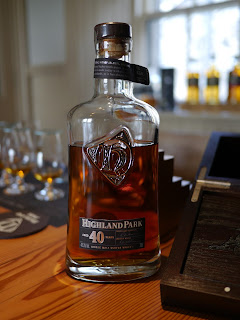 We were on the Magnus Eunson tour, and the tasting after the tour was extraordinary. Besides giving her sense of the drams and sharing her own, Hollie indulged our usual wild speculating about flavors, sensations, and the tenor of the experience undergone while savoring the Highland Park 12, 15, 18, 21, 25, 30, and 40 year olds. I previously thought that 30 years was as long as they went and it pleasantly surprised me to learn I was wrong. (The Highland Park 40 cost £900 for a bottle, but a mini could be had for £77. It was mighty tempting!) Needless to say, we heartily recommend the Magnus Eunson tour. Needless to say, after drinking eight drams, we were very glad we walked from and back to under the bridge where we planned to sleep for the night.

Many thanks to Steph Ridgway for helping set up the tour for us, many thanks to Hollie Sinclair for her expert guidance, and many many thanks to the cask quality control team. Finally, many thanks to Magnus Eunson, who founded an illegal distillery at the High Park near the end of the 18th century, allowing the modern incarnation to pour out rivers of gold.