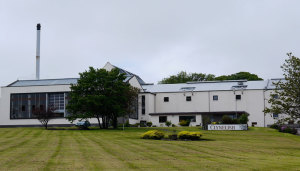 [Editor’s note: The write-ups of our distillery visits from earlier this summer appear here in no particular–and certainly not chronological–order…]

On the particular day John, Bill, and I were to visit Clynelish, we left our Inverness hotel less than seven hours after we’d settled into it the night before and made our way north.  The drive from Inverness to Brora is a fairly straight shot, unlike many other legs of our journey, and features lovely and somewhat varied scenery along the way.  We arrived a bit early and wandered about the modern distillery building.  I figured I might as well take some pictures of the stills from the outside, since Diageo does not allow photographs inside their distilleries (a fact they chalk up to Health and Safety, but which I tend to see as…well…hokum).  Once we’d done one revolution around the place, we met up with Brand Home Manager Claire Fraser for our tour and tasting. 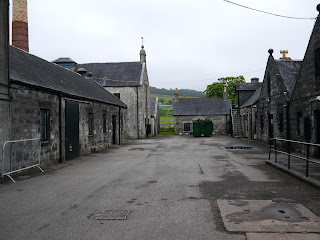 We were all struck by how knowledgeable and passionate Claire turned out to be on the tour—her commitment and attachment to Clynelish came through at every turn.  One of the first places this became apparent was when she showed us the washbacks and had us smell the distinctive pineapple note that becomes apparent late in the fermentation process (which is quite long at 80 hours) and comes through even in the distilled spirit (both new make and matured).  I found it incredible that the note is so clear so early and that it not only manages to survive distillation, but it does so without being attenuated much in the process.  The distillation process adds another key characteristic: a paraffin-like waxiness on the mouth.  It turns out that a dark residue builds up in the low wines and feints receiver and apparently has something to do with the waxy mouthfeel (which starts to show up after the first distillation), because when they’ve removed the residue, they have found that the spirit loses its waxiness.  I heard from another well-placed source that oxidized fatty acids from the wash release some chemical or other that could explain the waxiness.  I listened intently to this explanation, but found that the chemistry terms employed therein released something that had a rather soporific effect on me, so I went back to “Mmmm…waxy mouthfeel…” The best way I can describe the feel (the flavor is faint and a bit like paraffin) is that it’s somewhere between watery and oily (that is, as mouthfeels go): not full-on oily, but also more substantial and interesting than watery.  At any rate, this waxiness is something highly sought after by blenders, not the least of which are those at Johnnie Walker. 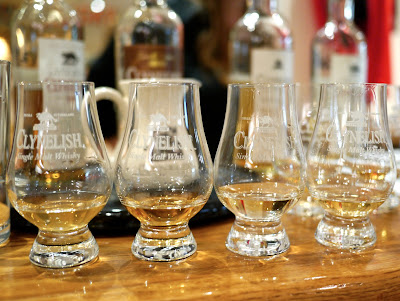 After a look at the distillery, we walked down to the warehouses.  Most of their spirit goes in tanker trucks to be placed in casks and stored near Stirling.  But they do store a number of casks in the warehouses that once belonged to the Brora distillery (which itself was called “Clynelish” before, and so on—for a good account of that history, see this post).  Claire was excited that they had recently received a couple of Brora casks that were to be stored in the warehouses there.  Unfortunately for us, these were not to be tapped for samples, especially not for self-avowed impostors.  However, Claire did let us take the valinch to two other casks there in that warehouse: a 1988 Clynelish and a 1985 Teaninich.  These were the last two of five expressions we were lucky enough to have Claire talk us through in the tasting room.  We also tried the standard Clynelish 14, the Clynelish Distiller’s Edition, and the Distillery-only cask strength Clynelish.  We enjoyed all of them, and even Bill, whose motto for the trip was “I’m not checking a bag on the flight back, and my only carry-on is my wallet,” was tempted to buy a bottle there.  I showed no such restraint and bought the distillery-only whisky (more on that in the coming days).  John considered buying one of the several cat-themed items for his daughter, because she loves unicorns.  Before we were finished, though, Claire hit us with a special treat:  a taste of a 1988 Clynelish, which was truly special, but unfortunately for me and fortunately for Bill, it was not for sale. 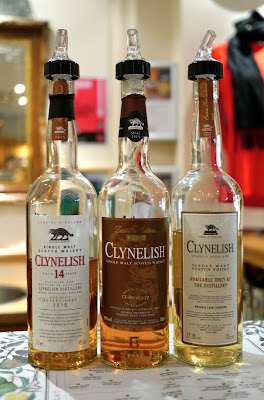 I have to say that I’ve enjoyed Clynelish at home and I’ve had good reasons to think highly of it (mostly its high regard amongst blenders), but I did not appreciate the whisky nearly as much as I do now after visiting the distillery and having Claire walk us through a number of beautiful Clynelish expressions.  Whatever Clynelish’s distillery building lacks in character, its whisky and its people more than make up for.  The proximity, both physical and historical, to the now legendary Brora doesn’t hurt either.  Clynelish is one of those almost hidden gems in the whisky landscape.  If you’re in Scotland, it’s well worth visiting.  Fortunately for all of us who can find bottles of it in our home countries, the whisky’s well worth tasting—again and again.