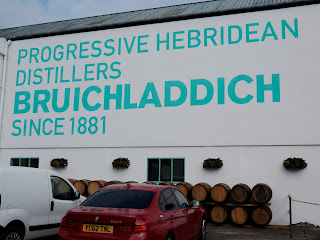 When we pulled into Bruichladdich, it was my third time to visit the distillery in the last three years.  It was the first visit for both John and Bill.  My first visit had been so magical that I’d decided to buy a cask at Bruichladdich before they stopped selling them.  I’d been told that the 200 casks (100 former Bourbon and 100 French oak) with peated Bruichladdich spirit in them were the last casks Bruichladdich was going to sell, since the Laddie Ten had come of age and the distillery would no longer need to sell casks to make ends meet.  Months later, after the sale to Rémy-Cointreau was announced, along with plans to ramp up production, I was glad I’d jumped when I did, because there were not going to be any more casks for sale in the foreseeable future. 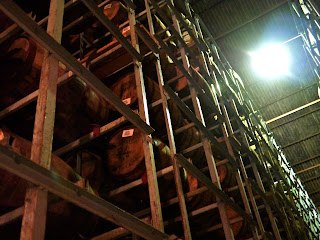 I should note that a buying cask just after it’s been filled is not necessarily a good investment.  The main reason for this is that you cannot know how that particular cask is going to turn out.  But I bought my cask more for sentimental and broader whisky interest reasons than for investment purposes: to own a little bit of the distillery and to have an excuse to come back to Islay often.  My excuse now is to collect the 100 ml cask sample to which I’m entitled once a year.  And at least these first two times since I bought the cask, I wanted to see it (and, this time, wanted John and Bill to see it as well). 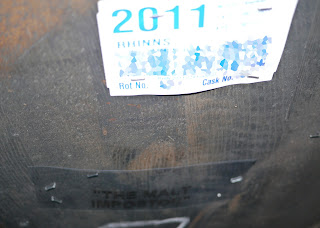 A young warehouse guy named Gordon took us up to the top level of the main warehouse to see the cask.  It’s really dark up there.  The pictures don’t tend to come out well.  But that won’t stop me from including one here nor from blurring out the bar code on the cask to protect Malt Impostor trade secrets.  The spirit itself, by the way, is coming along nicely and will be Scotch whisky in February of 2014.  That fact, however, Gordon put into proper perspective when he noted wistfully (but with great pride nonetheless) that he would not see some of the casks they were laying down now bottled as whisky and thus would not have the opportunity to enjoy those longest maturing fruits of his and his co-workers’ labors. 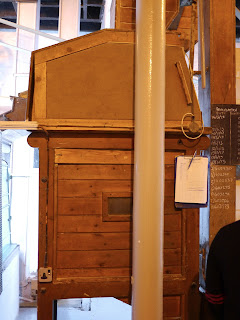 Shortly after visiting my baby, we found Carl Reavey, who proceeded to show us around the distillery itself, focusing on those features of Bruichladdich that make it unique and wonderful.  Carl’s title is Content Creation Manager at Bruichladdich, but his personality and great knowledge of all facets of Bruichladdich suggest something much more profound.  One aspect of the distillery that particularly impressed us (and that I didn’t discuss in my previous write-up) was the mill.  The mill is original and, though now powered by electricity instead of steam, still works via a series of chains and pulleys.  And when it’s running, it sounds a bit like an old wooden roller coaster (when it’s not running, it doesn’t). 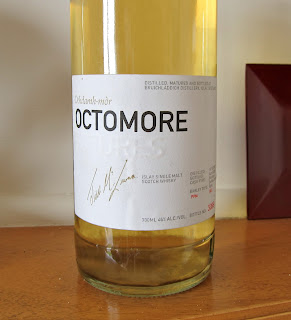 After the quick tour, Carl took us to an office/meeting room where we talked for a while and where he let us try a couple of things.  John and I had drams of the Octomore Futures, the 2008 precursor to the fabulously successful and much more widely distributed Octomore, while Bill tried the Black Art III.  In that office, we discussed all sorts of things with Carl, including the odd history of the Bere Barley expression [more on that expression later], the singular difficulties the Bere barley presented at various stages during production, and the various barley projects on Islay Bruichladdich had initiated.

Then Carl drove us to Octomore farm, the location of the Octomore distillery (from which the expression derives its name).  The Octomore distillery building is now a guest house on Octomore Farm, which is on the property of James Brown, one of the first farmers to grow barley on Islay for Bruichladdich’s use (at least the first since Bruichladdich reopened).  We met Mr. Brown only briefly, but wished we’d had much more time to talk with him–and will have to make sure we do next time around.  On the way back from the farm, Carl filled us in on some of the history of the local farming families, on aspects of the broader history of tenant farming in Scotland, and on the interesting phenomenon that is the Highland Cow. 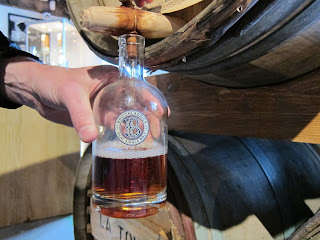 When we returned to the Bruichladdich Distillery Shop, Mary McGregor (the Shop Manager) was kind enough to let us try the current Valinch (bottle your own in the shop) expression.  I bought two.  John also just about flipped his lid when he tried the Botanist Gin, and then did flip it entirely when Mary made him a Gin and Tonic with it.
Then, on a lark, I asked Mary if Jim McEwan might be available to sign the bottles we bought.  Next thing we knew, we were in Jim’s office, with Jim railing against a very common, but rather stupid, thing some people like to do while they try to taste their whisky.  It was one of the funnier things we heard on the whole trip, but neither the content nor the exact topic will be repeated here.  Then Jim pivoted to speak movingly about one of the main charities he supports, the appropriately named Spirit Aid.  And he did all of this while carefully and expertly signing each bottle and tube we brought to him, and we gladly made the suggested donation to Spirit Aid in return. 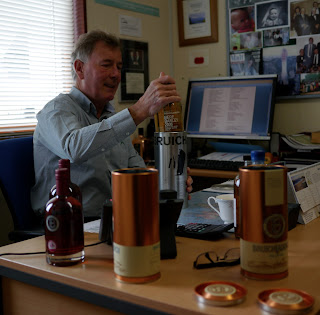 We tried later to characterize Jim McEwan and found it difficult.  He’s simultaneously many things at once: a showman, a twinkling-eyed genius, a warm-hearted old friend, a center of gravity, a cult leader.  Where do we sign up?
What am I talking about?  We did that a long time ago.

–Stephen
You can find out more about Spirit Aid at:
http://spiritaid.org.uk/ 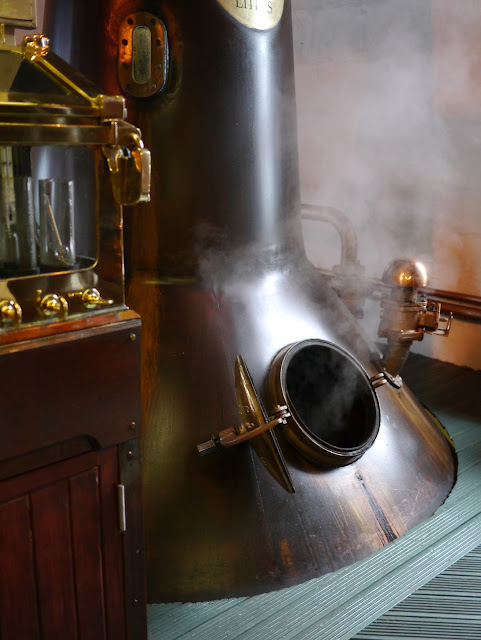