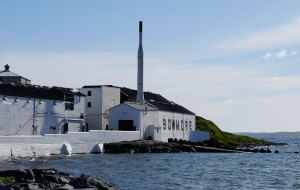 [In what follows, rather than attempt a complete description of all that befell us and all that we learned, I’ve focused on those snippets that were particularly interesting or stood out in some way. An Impostor’s Impressions, as it were.]

It was a glorious Islay morning. Bowmore has long been a favorite Islay of mine, in no small part because my local liquor store used to sell 15, 17, and 18 year old minis of it at very reasonable prices. Consequently, I was especially excited for it to be my first real distillery tour in Scotland, one that would include the malting floor, the peating and drying of the barley, as well as the more standard viewing of the mash tuns, washbacks, and stills. 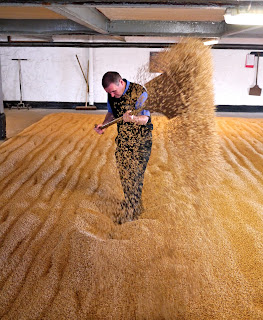 We were met by David Turner, the Head Distiller. He took us to the malting floor, picked up a shovel, and vigorously moved a good ten or twenty yards clearing a swath to the floor. This is done to ensure that the barley doesn’t get too warm as it germinates, and it surprised me that he walked on the barley, as I expected that the whole process would be hermetic and sterile. He pointed out that the barley would be smoked and scalded as a prelude to the beer-y watery run-off being boiled to extract the alcohol: Nothing on his shoes or that came in a window could possibly make any difference to the final product.
Turner invited us to take a turn turning the barley. I thought it easy enough, but it was hard to imagine doing it every four hours, seven days a week, 10 or 11 months out of the year. After that demonstration was over, 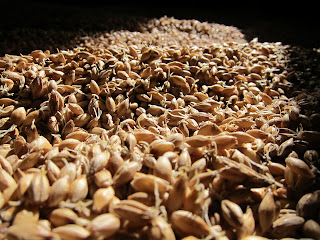 the barley was asymmetric and he lifted a kind of plow—a barley equalizer, if you will—from where it lay against the wall. The plow is held behind the malt man and dragged through the barley, reducing the thrown barley to a mostly uniformly spread across the floor. He showed us how it was done and again invited us to take a turn. This felt like real work. There was a lot of drag on it, and if I were a wee bairn being indentured into the craft during the recently-passed era, I would have despaired not a little. These days, small mechanical devices not unlike snowblowers and lawn mowers are used respectively to turn the barley and even it out.

We went up stairs to where the germinated barley is peat-smoked and heated. By now, having quickly grown accustomed to walking on it, I asked for permission to make “barley angels,” a distillery-only version of snow angels. Permission granted, I laid down and flapped arms and legs from side-to-side. It took some convincing, but eventually John and Stephen also got down in the barley. I hoped, and partially believed, that I was the first to ever play like that, but an industry professional we later met told us that on one VIP tour in the past, a whole party played in the barley for over an hour, making barley angels, having barley fights, and acting like kids having fun after a snowstorm. There’s nothing new under the sun and nothing new on the malting floor. 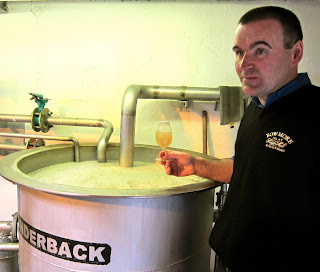 It was great to try the wort, the almost-beer, that was soaking in the washback (and the underback, pictured at the left). We got to do that at other distilleries, too, and it piqued our analytical capacities to see how different they tasted.  Another whisky professional later told us that she was of the firm belief that anything in the wort vanishes during the distilling. That makes sense, but is rather disappointing.
Then we saw the washbacks and got a chance to try the wash as well, which tasted like a slightly yeasty and slightly watery beer, despite the fact that it clocked in at about 8% abv.  After that, we toured the still house, then tasted a pair of whiskies straight from the cask in Bowmore’s No. 1 Warehouse.

The tour concluded with David acting as bartender and sous chef: He poured us a number of incredible Bowmore drams. Of particular note is the Springtide, which is travel-only. I’m not saying that you should leave the country to buy it, but there are worse things you might do with your money, y’know?

I don’t think the Malt Impostors have made a habit of rating distilleries, but the Bowmore was special, so I begged an indulgence from Stephen and John. On the scale of first-time experiences, visiting the Bowmore Distillery was popping your cherry pie in the oven. It was losing your Virginia City. It was wonderful. 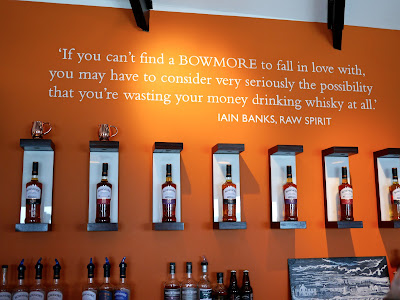 1 Comment on The Malt Impostors Abroad: The Impostors visit Bowmore