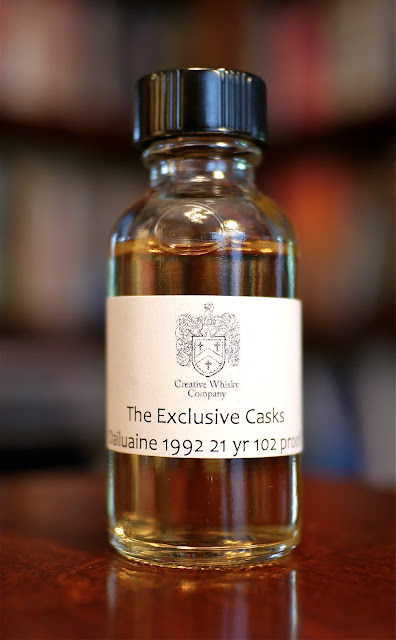 Tasting notes:
The Exclusive Cask Dailuaine 1992. The year 1992! The year Columbus discovered North America! (From a ‘Time scale of the Universe’ perspective, that is.) The nose is as strong as nail-polish remover, acetone, or some other organic solvent. Fortunately, it doesn’t smell like that. More like green bananas floating in an oaken tub of liquefied cream cheese or perhaps freshly-turned earth on a hot Montana day, dried out moments after exposure to the Big Sun in the Big Sky. Belgian waffles topped with clippings collected from a Beverly Hills hair salon that were intended to be sold on ebay. (Umberto’s, I think.) Another set of green foods jostle for attention: maybe pygmy plantains, breadfruit, and unpickled bamboo shoots?
The mouth is unexpected, like that in Picasso’s stolen Tête de Femme (1939). Viscous and syrupy, fortunately lemony and unfortunately snickety, coconut, the essence of tang (or Tangness Everclean, the unsung heroic kitty of the Hunger Games), tongue-thrumming, Joe Strummer guitar humming, unpersnickety Universe of Unpossibilities. In other words, it’s hard to describe. Brugmansia, known in the vulgar tongue as Angel Trumpets, of the (and I quote) “pendulous, not erect, flowers.” My kind of mouth, my kind of aromatic plant. Herbs, close to dried oregano and bay leaves.
The finish forgets to end, trailing clouds of glory, fogs of elm bark and war, geysers of fern spores, the Heideggerian Geist, the Ghost of Kaspar Hauser, and the gust of wind flicking golden-yellowing stray hay into vortices making the invisible visible, never risible.

–On the scale of things to sit on–
The Dailuaine 21 Year 1992 from The Exclusive Casks is the throne from Game of Thrones–It’s cross-swords, it’s Swords with Friends, it’s your Pass-sword, and it’s a place for your a** that’s majorly bad-a**. Settle for nothing less than ruling with absolute power.