It’s hard to know where to begin, in part because a blur contains no narrative threads; at best, a crazy-quilt. Hence, I’ll begin at the end. Much like the antihero Leonard in the movie Memento, I provide only short vignettes in an odd sequence. (Unlike Leonard, fortunately I don’t suffer from anterograde amnesia.)

Ω: Collapsing into my bed after a long train ride out of Boston. Who doesn’t like to nap four hours from late afternoon to early-mid-evening?

Ω-1: Shoving a pastry from Flour into my mouth. Om nom nom.

Ω-12: Me saying to Stephen that I wanted to go carefully and drink lightly. He immediately guided me to Brian Johnson of InterBev, who was pouring Balblair. He had the 1989 Balblair, which is elegantly delicious, and the 2000 Balblair, which is richly and fully delicious. He was converting a new disciple, mentioning that Balblair releases only vintages, not blends. Stephen pointed out the 1975, it was poured, and my ship left port. (The real ship stayed moored another hour.) Balblair is my favorite whisky. 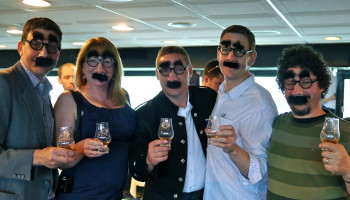 Ω-7: A picture in full Impostor regalia with Jessica Fuller and Jeffrey Karlovitch from the Whisky Guild, the good folks behind the Boston Whisky Cruise.

Ω-4: Pouring Blanton’s Single Barrel Bourbon into the cupped coffee of the suddenly abstemious Impostor John. Blanton’s is my favorite whiskey. Also, a shout-out to the quick and witty, mature and pretty pourmeister for Sazerac. Likely she remembers me only as an overexcited drooling mouth-breather. Well, someone has got to be below average, right?

Ω-3: Although they contributed to the condition that would have led me to be humiliated were I not in such high spirits as to be oblivious, I offer a public apology to the most excellent Joe Howell of Federal Wine and Spirits and Emily Duffy of Kilbeggan. In quick succession Joe poured me a snort of Brora 30 and at another table, Emily a tipple of Greenore 19. (Greenore and Brora are my favorite whisk(e)ys.) The joy that exploded through my veins and enlivened the cells of my brain inspired a pure Platonic love for their spirits, their generousness, and all things human. In turn, this inspired in me the need to loudly proclaim to both of them, separately, that although I wanted to kiss them, I wouldn’t. Not because I really wanted to kiss them, but rather as a sign that they were pouring truly delicious whisk(e)ys and that everything on the boat was better than perfect: a Zen beyond Zen, a dream that turned out to have been always true, much like Dorothy having always been able to go back to Kansas. (Unlike her, I got to stay in Oz for 3.5 hours.) I suspect that despite my protestations of the purity of my osculatory desires, Joe, Emily, and onlookers were likely perplexed and perhaps even hoping that someone had my car keys safely hidden from me, under the mistaken belief that I had had too much, when in fact I was simply euphoric. Emily and Joe: I’m sorry that the spirits you poured were so delicious and ennobling as to unlock deep poetic forces that found only a coarse expression through the medium of my thick tongue and overstimulated wits. But I forgive you. [John: I don’t think “apology” means what you seem to think it means, Bill.] 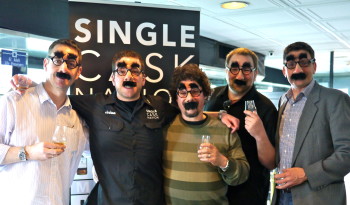 Ω-15: Joshua (Man)Hatton and our good friend Bozzy (of tire-bouchon) pouring Single Cask Nation‘s outstanding Benriach 17. Nitrous oxide wah-wah-wah-wah, but confined to the palate. If you’ve ever had dental work, you know of what I speak. Benriach is my favorite whisky. 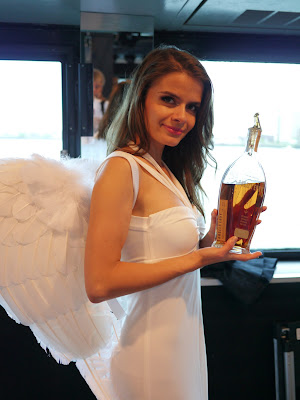 Ω-2: Losing the lottery; $40 down the drain—yes, Stephen and John, you both still owe me for that. I’d have cried except that I was so dehydrated I couldn’t produce tears. That, and the money raised went to OneFundBoston, a cause the Impostors are glad to support. 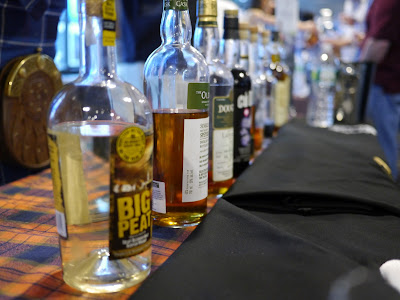 Ω-297: Boarding the boat. I wanted to run onto it, as excited as a 6-year old on the way to the birthday party of his bestest friend.

Ω-22: A stroll on the deck. Sunshine, fresh air.
Ω-101: A Signatory bottling of Mortlach poured by Joe Howell. Mortlach is my favorite whisky.

Here the traces of memory evanesce, like cigar smoke-rings dissipating in the moonlight over a foggy marsh. Adieu, fond memories; adieu embarrassments; adieu clarity; adieu forever fetters of the subconscious.