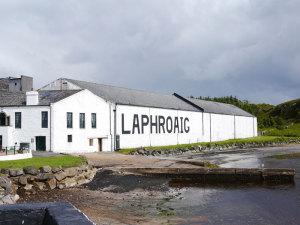 Tasting notes:
We arrived at Laphroig minutes before the “Water to Whisky Experience” tour was to begin.  (At £79, it was one of the more expensive tours that we ran across, but it was also easily the most extensive tour with the longest time commitment.)  We were greeted by our tour guide, Emma, who had worked there since 2005.  She invited us first to a picnic lunch that we ate indoors owing to the threat of rain.  There were wrapped sandwiches brought in from Port Ellen–smoked salmon, roast beef, or smoked venison–along with a remarkable hardboiled egg that was wrapped in some sort of sausage.  There was a delicious Laphroaig 18 to accompany it all, as well as special Laphroaig cheddar cheese that was a perfect revelation.  I would later see the hockey puck-sized wheel wrapped in black wax in the gift shop.  Why, oh why did I not buy it?  Finally, some sort of dark bread that was sweet and desserty.

After lunch she took us out in a van to the source of their water, the Kilbride stream.  She walked us a long ways over stony and hilly country side, past many grazing sheep, until we found the stream.  She poured the Laphroaig Triple Wood for us, pulling the bottle from her backpack as we gathered around a round picnic table.  The cleverness of this tour was now apparent.  Instead of enjoying all of the whiskies at the end, we would have them as we went along. 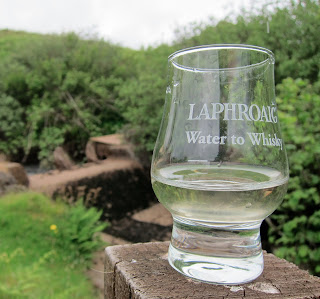 At Emma’s suggestion, I jumped down to fish some water out of the stream.  It was yellowed by the peat but perfectly drinkable.  I shared it with the others on the tour: a husband and wife from LA, and a pair of parents from Colorado and their daughter, a budding architect.  That’s right.  An all-American tour.  We couldn’t help but wonder: where were the Latvians that day, or the Estonians or the Laplanders, for that matter?  Where were the benign, more or less indigenous varieties to help slow the spread of we Americans, the invasive species?  All kidding aside, we could not have asked for better tour partners than we had in our compatriots that day. 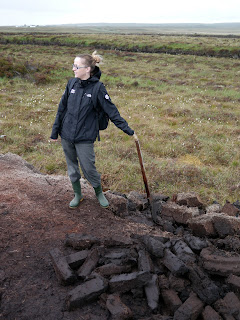 Back to the van for another short drive.  The plan was to cut peat in a field near the airport.  There we enjoyed the new Cask Strength Laphroaig, which we all thought was great.  It was windy and a little wet but lots of fun.  Emma demonstrated to us how to cut peat.  (This looks like soil; its the compacted and decomposed plant matter that can be dried and burned like firewood. It gives off a remarkable smoky, vegetal smell that is distinctive of Islay whiskies.)  There were special tools used to cut down into the mucky peat, ideally producing a rectangular tube about the size of a split log.  These are then set in criss-cross piles to dry. 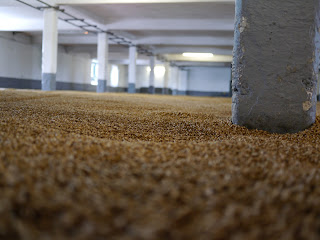 From there we went back to the distillery to see the malting floor where water stimulates germination and produces the important sugars and starches.  We also saw the peat- and coal-fired kiln that heats the malt to halt germination.  And we saw the grist mill that grinds the dry, malted barley in preparation for the wash.  Laphroaig malts its own barley and we were invited to hold the barley and smell it. We also got to see the kiln working to heat the barley.  Finally, we viewed the spirit and wash stills. 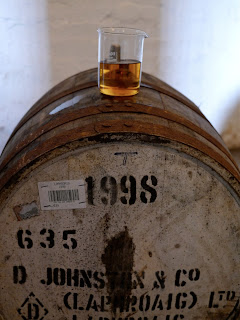 At the end of the tour, we visited the warehouse.  There we tried the new-make spirit, a 63.5% alcohol clear spirit that goes into all of the casks that they use for maturation.  The casks are responsible for the color and taste variations Laphroaig achieves in its different expressions.  At the very end we got to try three different Laphroaigs, straight from their bourbon casks (likely all Maker’s Mark): a 1998, 2002, and 2005.  We used a copper valinch to suck up the spirit so that we could fill our own small bottles that we could take away with us.  Cask strength whisky is very cool.  Cask strength Laphroaig is extremely cool.  How is it possible that four hours passed so quickly that afternoon?  It felt much, much shorter. 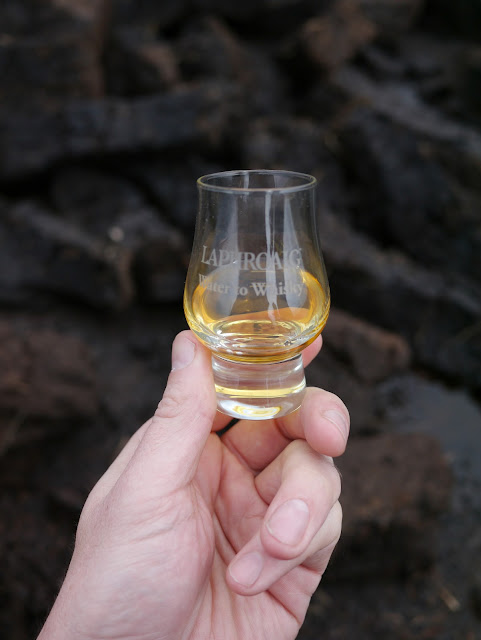