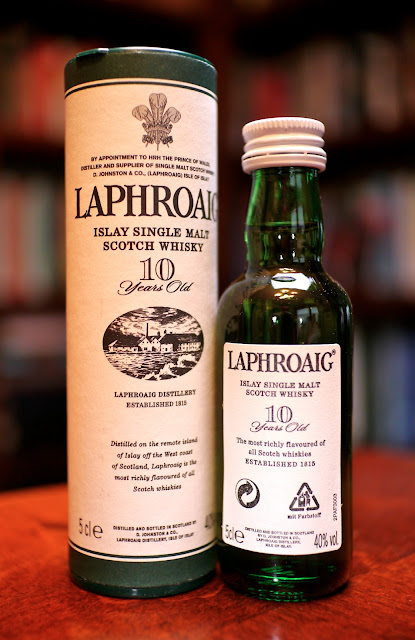 Tasting notes:
The Laphroaig 10 is a cardinal point on a (hidden) compass rose at the center of the maze on the floor of the Chartres Cathedral, a well-thumbed reference malt in the library, a bookend to the love of whisky. What made it once so distinctive and such an outlier to a neophyte, a newly-converted acolyte, has been hyperbolized like a hyperbola in other X-treme Islay drams, much as Dogfish Head 120 Minute IPA has taken hops beyond it’s logical extreme. But a trip back to the source of my love of heavenspawn peatfire and smokeangels—a trip not taken for some time—rewards more than Proust’s bite into a madeleine, more than Jackie Robinson’s stealing home, more than Aretha Franklin’s eagle protecting his nest, the Laphroaig 10 takes us home to a home we never knew we had; a central spot near a warm hearth, fire ablaze, rich meaty stew in the kettle, and bonhomie keeping the cold world at bay.
On the nose, seaweed deep-fried in bacon grease: A carnivore’s answer to kale chips. Actually, rejoins Stephen, the answer is bacon. Always bacon, only bacon, except when the answer is Kevin Bacon, Roger Bacon, or Francis Bacon. It’s the smell of sunset on the beach, victory after a long battle.
On the mouth, crystallized driftwood smoke, focusing my Chi, rearranging the maltcave liquor cabinet holdings according to the 11th – 20th rules of Feng Shui. [John: Bill! There are only ten rules of Feng Shui!] “Those who say do not know, and those who know, do not say.” The post-prandial-eructation of a contented fire-breathing dragon who eats only peaty dwarves and alabaster plaster scale models of Michelangelo’s Pièta. It’s…it’s…a burlwood dictionary stand, place held by a Lorelei’s braided hair bookmark, all situated at the shiny midpoint of a pentagram of inlaid abalone shells and mother-of-pearl.
The afterburn is as satisfying as blowing the carbon out the exhaust of a 700cc crotch rocket, as fresh as morning dew on ferns in a climax forest, as incomparable as a Platonic form. It’s eating the best pork loin served with ripe pineapple slices and chutney: charcoal chutney. Burnt umber chutney. Ending with ballerina slippers oozing Lotrimin® and Natalie Portman’s Black Swan leg warmers.

Rating:
–On the scale of things that move me to previously unimaginable Gardens of Paradise–
The Laphroaig 10 is the rebooted Star Trek’s transwarp transformer beam that >>>STOP STOP STOP!!! This is Stephen and John interrupting this rating, performing a necessary geekerectomy intervention on Bill. We can’t allow him to bathetically move from the poetry of the dram to the gadgetry of Star Trek. Snap out of it, Bill, and try again!<<<

–On the scale of things that move me to previously unimaginable Gardens of Paradise–
The Laphroaig 10 is itself–Enough said.