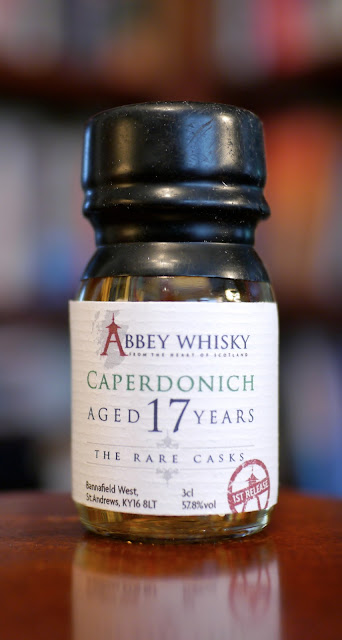 Tasting notes:
This whisky pours out tawny like a puma.  Grrrroooowwwllll!  A nose of buttercream, thin mints, flowery perfume, fermented bananas, and new tires on an old car.  As the nose comes into greater focus, Stephen gets buttery oily spice.  Bill says it’s a curry, just not exactly a curry.  I aver that I’d eat at lot more Indian if this were a curry.  So we’ll say it’s a limited release ghee running down a helical water slide off an oil rig set into the North sea.  In time the nose gives a slight note of egg, like albumen bubbling white on a hot tarmac, the blue blazers of the welcoming detail flapping in the strong coastal breeze.  The mouth is delightful, smooth, and balanced.  Scallions (the green part), mint (just the leaves), and peanuts (shells only).  Salted cod drying on slate shingles.  Dreams of the rarebit hound, but in the mind of the rabbit.  The finish has allspice or mace, but with some sweetness like myrtle berry and rosehip candies formed into miniature garden gnomes.  Wisps of clove de-tanged, like a cobra defanged.  We are left only to imagine how a few drops of water would open this up.  But this was so delicious at 57.8% abv that with only 10 ml’s a person, we weren’t able to try adding water.  With just 96 bottles out there, be sure to take one down, pass it around, and tell us what you think of it.

–On the scale of NFL quarterbacks—
The Caperdonich 17 from The Rare Casks is Colin Kaepernick—  And not just because it’s a near homophone.  No, it’s the deadly accurate passing and lightening fast running–just ask the Packers.  The Caperdonich brings news skills to an important position and destroys the competition.


Our thanks to Abbey Whisky for the sample!

*–The Rare Casks is a range of single malt Scotch whiskies bottled exclusively by Abbey Whisky.