[A while back, Stephen was lucky enough to attend the launch event for this whisky. You can read his review of the HP Loki launch here.]

Tasting notes:
There’s no nose! Some sort of trick?? WTF, Highland Park?
–Oh, I hadn’t yet unsealed the bottle, thus not poured it into my glass. Fine, be that way, Highland Park Loki; you pranked me already.
Moving forward, the nose is an understated, dare I say, low key red velvet cupcake with green apple buttercream frosting. John, who collects ephemera of the famous, who bid on Judy Garland’s Wizard of Oz shoes, wonders about the availability of Katy Perry’s cupcake bra “for comparison purposes only.” Well played, John. On the other hand, Stephen doubtless alluding to other Katy Perry garments detects…a “bucket of lutefisk.” (He’s referring to her shrimper boots!) I, the third leg of the stool, get the Beauty and the Beast ballroom after Mrs. Potts accidentally spills hybridized green hibiscus tea while tangoing with Cogsworth. That, and desalinized sand and dried coral bits crusting a lemon atoll in the North Sea.
On the mouth, satyr hooves trampling red hot chili peppers into a very special red libation. Wait, what? Who’s taking over my keyboard? I meant to write “rosined bowstrings made from ferret guts being drawn over Pinewood Derby entries.” 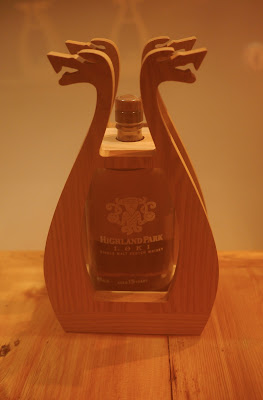 Provolone, rather the tang of provolone minus the cheese of provolone. Al Capone at home alone, eating provolone. It’s a damped harmonic oscillator with peaks at Highland Park qua Highland Park and valleys at a marzipan sea urchin masquerading as a lily pad in a koi pond. It’s like being on a see saw with a kangaroo, and you’re holding the joey. It’s alfresco dining tête-à-tête with Ivanka Khristova, a Bulgarian shotputter with a 40-inch vertical leap.
The finish converges slowly to a Highland Park feel, giving the sense that it is protean and labile, stably eruptive. It’s a silk-canopied howdah on Dumbo, a block-print Indian print cloth hanging decoratively on the wall. It’s saffron wisps woven with rosemary sprigs into a Palestrini motet by Rumpelstiltskin’s sweet-natured little sister, who always has to apologize for her brother’s odd behavior. (Her name is “Humpelforeskin.”) Loki! Quit messing with what I’m typing! Her name is “Sintastarfin,” or something like that. She never sang her song loud enough for me to hear.


–Our thanks to Steph Ridgway and Highland Park for the sample!