[A little over a year ago now, Bill wrote a review of a mini of this whisky.  Recently, we received a sample bottle and worked up a full set of notes on the basis of which Bill wrote up a new set of tasting notes.  But since the vebmeister never got around to publishing Bill’s original review, we’re publishing both here, new one (full bottle) first and older one (mini) second.  Leave us a comment and let us know which set of tasting notes you like better!] 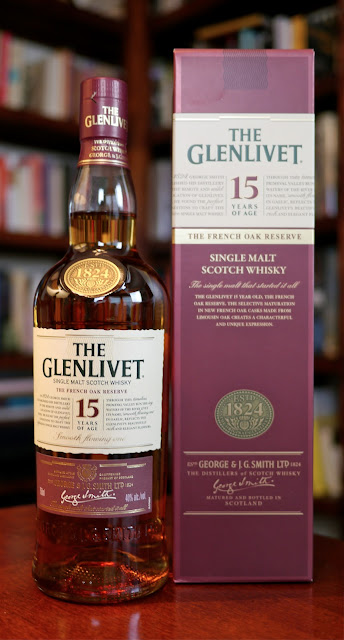 Tasting notes:
Ze Glenlivet 15 Ze French Oak Reserve noses like papaya-flavored Robitussin™ specially formulated for children in Costa Rica and ze Dominican Republic. Instead of “papaya,” ze British say “paw paw,” as does Baloo ze bear, which is not surprising since Rudyard Kipling was British—even though he was born in Mumbai. (Ze older I get, ze more confusing categories become.) Nosing as smooth as Brancusi’s L’Oiseau dans l’espace (Bird in Space) and as moistly-fruited as a still-life painting executed in a steam room by Delacroix.
On ze mouth, lentil dal with apricots served à la tandoor, vidalia onions, charred lemon slices, and coriander.  [John: Bill, please explain to our readers HOW YOU GRILL SOUP!]  Smooth and thick, a bit of ze burn on ze lips: Think of kissing cayenne-coated Corian™ kitchen counters. Some Skor Bar™ at the back of ze throat, giving way to ze muskiness of down pillows slept on by the young Cameron Diaz. Or Junot Diaz, I always get ze two of them confuzzled. Ze dried and styled hair of a St. Bernard in ze tack room of a royal Swiss château after ze doggy ran off mimeographs for a missing skier.
Ze finish is robin feathers somehow coupled with highly attenuated lemon syrup used in cocktails that call also for cinnamon sticks. Very round without being voluptuous, but still bringing ze sexy. Curvaceous, circular, and toned like ze hot person at ze fitness club you surreptitiously scope out from ze elliptical trainer.

Rating:
–On ze scale of movies with ze actors speaking with preposterously bad French accents–
Ze Glenlivet 15 Ze French Oak Reserve is Monty Python and ze Holy Grail–Too many classic lines to write here, so I’ll settle for “I’m French! Why do you think I have this outrageous accent, you silly King!”

Tasting notes:
Before tasting this, I confess that I felt some, well, reserve at the thought of a fine Glenlivet whisky languishing for an extended finish in French Oak. I do loves me some white Bordeaux wine–especially coupled with fresh-catch brook trout almandine garnished with grapefruit-papaya relish–but inflicting that on scotch? Really? And while the French have generally been enemies with the English since the Norman Conquest of 1066, were the Scotsmen behind this idea, thinking along the lines of “the enemy of my enemy is my friend”?
Fortunately, as soon as Drammeister Stephen unscrewed the lid of our 50ml nip, my fears were assuaged and allayed, massaged and acupunctured: They quickly deflated under the upswelling butterscotch hot air balloon whose basket was made from the wood of Pinocchio’s nose while he was explaining about all the weapons of mass destruction stored in über-secret bunkers and redoubts in Pleasure Island. Or maybe a special toffee space shuttle created for adults by Willie Wonka, piloted by a miniaturized Oompa Loompa who recently bathed in vat of dark chocolate and almond dust.
The mouth is so very, very smooth, it’s like surfing on a koa wood surfboard sanded and polished by a Big Kahuna while listening to a band of daemons playing ukeleles and Hawaiian slack key guitars as they orbit around your head. The syrupy legs are like the spit-up of cherubim who overly indulged at a heavenly banquet–that is, if cherubim eat. And spit up. Imagine further ambrosia spiced with elderberries, lingonberries, and tiny tart wild blueberries speckled, like dew, with pixellated grains of gulab jamun. As much as I enjoy the normal mapping of my senses to my brain, this expression unleashes a crazy synesthaesia, like an old-time phone operator hysterical with joy, plugging in cords and cables to all the wrong sockets, and yet finding that the surprising connections led to marriages, mutually beneficial deals, and the reuniting of estranged children with their parents. (Mom? Are you reading this?)

Rating:
–On the scale of improbable alliances–
The Glenlivet 15 The French Oak Reserve is Bono (not Sonny Bono, but Mr. U2) and former Senator Jesse Helms–One wants peace, love, and universal harmony, and the other, well, I’m not sure what Jesse Helms wants, but based on his voting record, I don’t think it’s the same thing. Nevertheless, a toast to the two million AIDS sufferers in Africa saved by this unusual partnership. Slàinte!