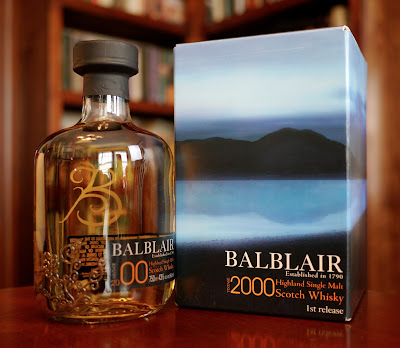 Tasting notes:
The Balblair 2000 was distilled in 2000 (a curious coincidence?) and bottled in 2010. Paper, pencil, mental exertion, abacus, pregnant pause: It’s ten years old! [John: This is like writing a review with Deep Blue or Watson if they were, you know, unplugged and inert.] The nose soothes with apricot nectar before reigniting PTOMGTaCitHS (post-traumatic-oh-my-gawd-there’s-a-child-in-the-house-syndrome) in Those Who’ve Had Children with the unmistakable waftings of just-cracked Gerber™ apple-pear-strawberry-banana baby food jar and freshly-folded nappies. It’s wonderful, precious, and disorienting like visiting the Louvre and slipping wildly, arms flailing, on an installation of machined titanium Bal-blairings. Scottish Spring™ soap for turf-cutters and sailors meticulously carved into sabots worn by the Vienna Boys Choir on a visit to Kyoto. (Let’s hope it doesn’t rain much in June!) It’s like a soccer ball after being kicked around in a 1998 World Cup match in the Parc Obscure in Bordeaux. [Stephen: Bill! That’s the Parc Lescure in Bordeaux!] Such a ball, that is, if the match had been played between two All-Citrus National teams from the (respective) Tropics of Cancer and Capricorn. All hail the subtropics!
On the mouth, it’s like a Vice Presidential Ball at the Blair House in Washington, D.C.  If, that is, the VP was hosting a debutante ball for mermaids aspiring to a career in the Coast Guard: Drying brine, engine oil, plaits of sea goddess hair, and the near-maternal love of one’s favorite aunt. (See E. O. Wilson’s Sociobiology for the statistical analysis.) Fisherman’s boots, and in passing, the beloved and reliable heat-molded shoes of the fisherman’s wife (which are some jiveass slippers). Mango juice behind the brine—or perhaps under it, like roots growing beneath the tarmac of the A836. It’s like a Zombie cocktail; a Scottish bomb diggity: A dense brown molasses spoon bread with carmelized onions dipped in rosemary-infused olive oil. Boom! Diggity. [John: Have you no self-Diggity? —John]  Not when my glass is empty, John.
The finish is a continuation of the mouth, much like Act III is a continuation of Act II in the famous opera, The Balblair of Seville.  [Stephen: That one physically hurt me.]  Spicy and savory, tarragon and thyme muted from being dried in the Andalusian sun. Bay leaves and parsley; Thanksgiving stuffing strewed and lemon juice drizzled on the Scarborough Fairgrounds.

Rating:
–On the scale of revolutionary humor stemming from ad-libbed Vaudeville humor remade for a new generation–
The Balblair 2000 is The 2000 Year Old Man (key bit at about the 6 min. mark)–The claim is that music began with the song “A Lion, is Eating, My Foot Off, Somebody Call the Cops!” I’d change that lyric to “A Lion, is Eating, My Foot Off, Pour Me Some Balblair!”

Our thanks to Brian Johnson and InterBev for the sample!