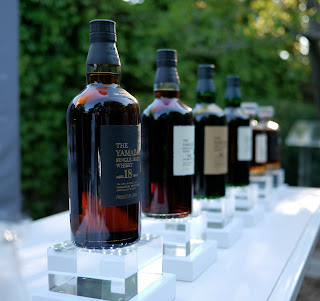 Earlier this week, I had the distinct pleasure of attending a one-off tasting event at the Noguchi Museum in Long Island City, NY put on by The House of Suntory Whisky and chefs David Bouley and Isao Yamada of Bouley and Brushstroke restaurants, respectively.  This collaboration between the House of Suntory and the two Michelin-starred restaurants was nothing short of extraordinary, especially given that the whole event occurred amongst Isamu Noguchi’s sculptures in a clean, open museum interior and a gorgeous Japanese rock garden outside. 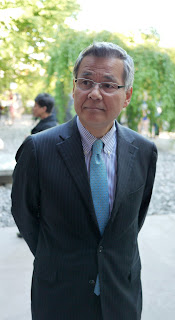 Suntory’s global brand ambassador, Mike Miyamoto and chef David Bouley introduced the whisky tasting and an “interpretive kaiseki-style food-pairing menu.”  Of course, at the time, I had no idea exactly what was meant by that last bit.  Shortly thereafter, however, I came to understand that whatever else it entailed, it apparently also meant elegant and delicious.  It was also the best pairing of food with whisky I’ve ever experienced.  Easily.
The event began with a tasting of three whiskies at standing tables in the sculpture garden: the Yamazaki 18, the Hibiki 21, and the Hakushu 25.  The last of these I’d never had, and of course I found myself comparing it to the Hakushu 12 (which they had served us in a great highball as we walked in). 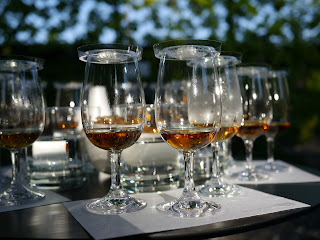 To put it in very general terms, the Hakushu 25 is to the Hakushu 12 as the Laphroaig 18 is to the Laphroaig 10–only the level of subtlety is much higher in both of the Hakushu expressions.  Oh, and I learned that it’s pronounced more like HOCK-shoo (emphasis very much on the first syllable).  Now, go back and re-read this paragraph and pronounce “Hakushu” correctly this time.  Good.  Well done. 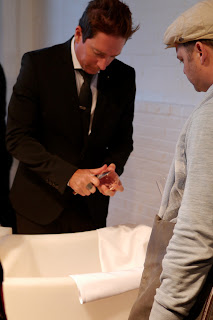 With that Hakushu 12 Highball, the chefs paired a canape of green apple meringue with smoked salmon roe, trout roe, and white truffle honey, and also a small plate of press sushi with Sansho pepper and bamboo shoot, served with kinome leaf.  Inside, Suntory U.S. (East) Brand Ambassador Gardner Dunn hand carved huge ice balls for a drink termed–interestingly enough–the “Hibiki Ice Ball.”  Paired with that big bag ball o’ ice drenched in Hibiki 12 were…well, I’ll come back to that, because those two were my favorites of the night.  Also inside was a station devoted to making a drink called the “Yamazaki Mizuwari,” which blended Yamazaki 12 with a little water and (much smaller pieces of) ice.  With that drink, the chefs paired a canape of wild mushrooms with toro and a foam of spring garlic and coconut as well as a small plate of organic wild duckling with Nevada dates and Canadian wild rice and topped with kumquat.  I enjoyed the duckling plate quite a lot, but I think that in my case, the multinational character of the dish pleased me (would’ve been even better if they’d specified that the duckling was Chilean), as did the word, “kumquat.”  Really, how do you beat “kumquat”?!? 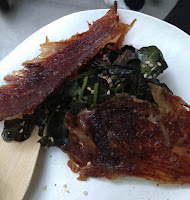 I’ll tell you how: you pair an oddly named drink with two of the better dishes of the night.  Of course, I’m talking about the eponymous Hibiki Ice Ball and the canape of Wagyu beef jerky served with watercress and sesame.  Let me just let that sink in for a second.  Yep, that’s right: jerky made from Wagyu beef.  I mean, who does that?!?  Unbelievable, both in concept and execution.  I had at least three.  And since at that point in the night, a waiter called Jean-Luc was serving them, I immediately deemed him the very best of the servers (and my favorite).  More on him later. 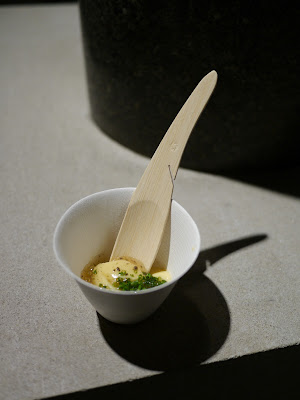 The small plate paired with the Hibiki Ice Ball was Chawan-Mushi, a Japanese egg custard served with a rich dashi broth.  Now, let me be clear: I am not a fan of egg custard, egg curd, or really any other way of cooking eggs–other than scrambled (and even then, there’s a lot of Tabasco involved).  That said, not only was the Chawan-Mushi exquisitely presented (see the pic to the right), but it was fantastic: so silky and creamy and light, and beautifully contrasted with the strength of the broth flavor.  And paired with the Hibiki, the two dishes highlighted the breadth of good stuff the whisky has to offer: the custard complemented the spice and backbone of the Hibiki, while the beef complemented its balanced, creamy mouthfeel.  Amazing all around. 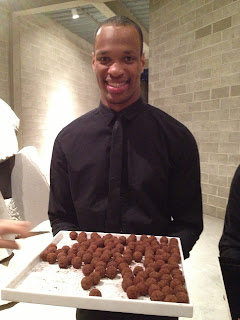 And as if all of that weren’t enough, there were desserts.  At some point, we were directed toward truffles, only to find my favorite man in black that evening, Jean-Luc, having shifted from Wagyu beef jerky to whisky truffles.  Seriously? It may have been just a coincidence, but the man had an uncanny knack for showing up with exactly the thing I was looking for at the moment he showed up.  Thank you, good sir: you materially improved my evening, and on that evening, that was no small feat.
Besides the whisky, the food, and the interesting people I met at the event outside of the whisky industry, I was pleased to meet Allison Patel, the young whisky innovator behind Brenne, the French whisky finished in Cognac barrels (ahem, ahem…samples, please…ahem, ahem).  Meeting and chatting with Neyah White, the U.S. Brand Ambassador (West) for Suntory, was another treat.  And of course, I loved catching up with Brand Manager Yoshi Morita as well. 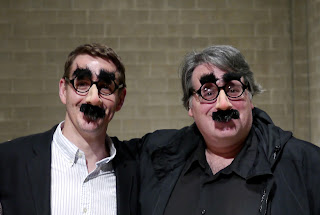 I also had the great pleasure of meeting a few whisky bloggers with whom I’d chatted online.  It was awesome meeting Joshua Gershon Feldman, the mind behind The Coppered Tot blog (pictured right), as well as the wonderfully pseudonymed G-LO and limpd from the It’s the Booze Dancing site (pictured below).  See “Whisky Links” in the column to the left for links to their sites.  There’s a LOT of great information and fun on their sites, and their whisky geek-dom is developed enough that I had many moments talking to them that left me acutely aware of the fact that I am still, like it or not, an Impostor.

The event itself had a similar effect on me–that is, when I finally stopped basking in the glow of it all and realized how inadequate I was as either a whisky expert or a journalist.  Having two whiskies worth roughly $1000 each (the Hakushu 25 and the Yamazaki 25) on offer at the bar didn’t do anything to diminish that feeling, either.  Interestingly, having them on offer also did nothing to diminish my interest in going back to the bar to drink more of each. 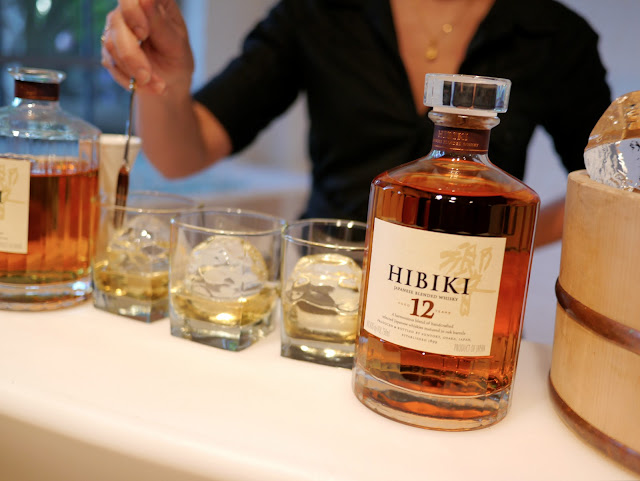