[In exactly two weeks from now, all three Impostors will land in Scotland for what looks to be an amazing nine days of whisky, tours, sightseeing, and ridiculous fun.  Just pray that Scotland can survive the trauma. 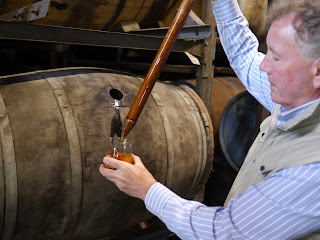 To celebrate that upcoming trip, we’re posting our tasting notes on three valinch bottlings from the shop at the Bruichladdich Distillery (Jim McEwan selects a cask, which is then set up in the middle of the shop so that customers can fill their own 500 ml bottle from that cask–each “valinch” has a different label).  Two of these Stephen filled over the past two years, and the third our friend Joshua Hatton brought back for us.  In a little over two weeks, we’ll be filling a new one.  Until then, please enjoy John’s write-up of our tasting notes on these three valinches.]

We are big Jim McEwan fans.  Some of us have met him on Islay; all of us have met him in Boston; and we have stood with him in a Captain Morgan pose on a hotel chair shouting in what we now believe to be nonsensical Gaelic, with our glasses stretched out before us.  So the chance to do a flight of some cask-strength Bruichladdich expressions was not to be missed. 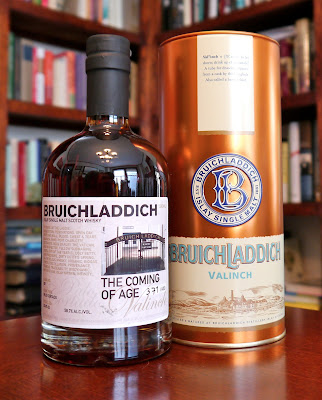 “It’s not that it’s undrinkable; it’s that it’s wrong,” quoth a whisky expert we knew who’d tried it.  With such warning, we were eager to try this very curious dram first.  Tobacco betwixt saddle and horse on a long, hot ride.  Gun powder as an ash coating on a narwhal cheese (and boy, did the HMS Malt Impostor submarine ever get put through her paces on that extraction).  Graphite dusted shrimp crisps eaten noisily during the performance of Mahler’s Fourth Symphony.  Industrial strength tannins for preparing baseball glove leather, then worked into an old mitt that’s gone from comfortable to downright floppy.  Cherry syrup, but laced with camphorated tincture of opium.  Sherry spilled on a wooden skiff, decaying into the Thames, on which the bilge pump was serviced with the highest quality safflower oil.  Then that same safflower oil used to wipe down the wooden furniture in a summer house, and then recollected once more in a rain barrel.  Water tames it just like it does pure potassium.  We go from a cough syrup (the kind that makes you cough) to a very cordial cherry (“Hello, how might I help you?”).  Chewing cigarettes found on a subway platform after a bath salts misadventure.  All of this belies the joys of this whisky’s singularity.  This expression is so unique, it gobsmacks the sensory processing and, in special cases like this one, elicits the mutterings of an inner voice to which our consciousness has limited access (perhaps thankfully).  Unusual drams like this one put down tent pegs or move goal posts that change our appreciation for other whiskies.  And change our appreciation of ourselves. 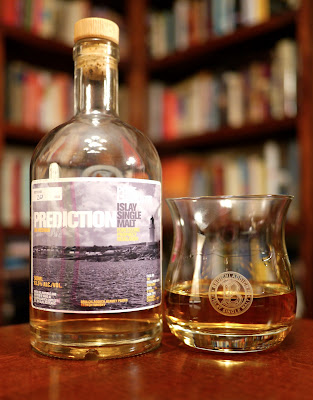 This one clocks in at a staggering 63.5% ABV.  Reading about the Bourbon and Château Latour casks invite jokes about an unlikely marriage of a Southern gentleman and a French——But rather than complete the image and make this review available only to Malt Gone Wild subscribers, we’re onto the nose.  Machine-cut potato chips soaked in truffle oil, and boiled over a wood-fired kettle fed by Stradivarius kindling.  A whortleberry dip complements the crispy refinement perfectly.  Crushing peat smoke on the mouth, but at the same time it’s smooth.  Think black tea leaves in whole milk and then something completely different happens.  Burning lemons launched through a balky potato gun.  White grapefruit reduction, reduced with lava over the course of three months in a caldera.  A pork loin hewed out of the pig while still living.  Liquid smoke from the pork ribs whisked into the white grapefruit reduction and then used to lacquer a Twinkie.  A fantastic jazz duet between a bassist (Paul Dunbar) and a trumpet (John Faddis).  In short, it is a wild dram.  Like Desi Arnez’s low budget and schlocky “Islay Lucy” which he pronounced “I slay Lucy” no matter how many times we corrected him.  This is the whisky to present to a wildly incompatible pair of people in an utterly successful relationship.

We love the label on this one and stand around to admire it for a while.  Also the ruby depth of color makes it look like a blend of Cabernet Sauvignon and antifreeze (not that we’d ever do that…again).  The nose is brilliant.  Wafts of sherry “like a cloud making a sunrise from glare to God’s painting.”  We stop to slag Bill for his poetic turn but we think he’s right.  Emboldened by our approval he interrupts with “Burgundy cask.”  Stephen and I just look at each other as he goes on, “Not a Bourdeaux or Zin.  Burgundy.”  His authority gives us all the excuse we need to move on to the mouth.  And though none of us says it aloud, we’re like cartoon characters sharing the same thought bubble of a Joycean “Wow I said wow that’s right wow.”  We fall into silence like diners eating the best meal, retreating into the fatty folds of our felicity and turning the whisky over in our mouths with utter delight.  Then Bill breaks the silence with “It’s almost as good as Southern Comfort.”

(At this point Stephen invoked the dreaded article 8.37 in the Malt Impostor Rules of Disorder to immediately adjourn this tasting session and simultaneously convene an emergency meeting to engineer Bill’s defenestration.  Bill invoked the obscure codicil to article 13.5009 [nicknamed, “Llewellyn”], Appendix Gamma, to claim that he was protected from defenestration and, besides, he was joking.  With that I moved that we reconvene the tasting session and it was ratified unanimously.)

Back to the mouth, then.  Joyous.  Splendid.  We could think of no better bottle for Barbara Eden to transform into, after asking her to turn herself into the best whisky ever.  Microscopic grape pods explode along our gums.  It’s drying on the finish; a Jerry Tarkanian towel munched on vigorously.  And in that long, so very long finish, we find Josephine Baker, primly clad on the way to church, but stopping on the way back to chat with Bill about her trip to Craters of the Moon.  She told him all about the Hawksbeard, Salsify, Groundsel, Larkspur and Rockcress she saw there.  Seeing his interest, she leaned in to whisper to him about the Turpentine Parsley, Gland Cinquefoil, and White Stem Stickleaf that popped up everywhere.  Bill asked about the Serviceberry, Fernleaf Fleabane, and, very politely, inquired about the Brittle Bladder Fern.  At this she just smiled and placed a Fuzzy-Tongued Penstemon on his lapel.

Rating:
–On the scale of plays on unique pieces of literature–
This singular flight of Bruichladdichs is The Valinch that Stole Christmas–Being able to work our way through these three one-off, cask-strength bottlings, one right after another, made us feel like Christmas had come early (with the Valinches).