[We reviewed this whisky back in the old days, when our tasting notes had an even more tangential connection to reality. The bottle’s also been redesigned since then. Plus, this bottle’s a lot bigger than that other one.] 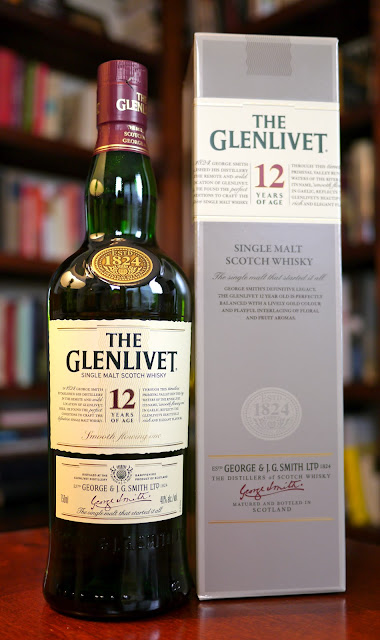 Tasting notes:
The The Glenlivet 12 opens with what I thought was an extraneous “The” but have since learned was appended as a qualifier and signifier, that the The dram in hand was, in fact, THE Glenlivet, not an impostor merely calling itself “Glenlivet,” cashing in during an unscrupulous time on an established name. There were many Glenlivets, but only one The Glenlivet.
The The nose is honeycomb (not from African killer bees) rubbed on a Chippendale mahogany cabinet, fresh fruitcake tucked in the The crook of a ballerina’s arm, bananas served in bleached-flour hot dog buns to skeptical children at a vegan birthday party, a sopping sponge soaking up spilled kiwi and kumquat juice, and a field crawling with amphibious pufferfish camouflaged as thistles.
[John: I got all that exactly, except it was the The crook of an emergency room intake nurse’s arm.]
The The mouth presents pre-melted ice-cubes, rain on a sheep’s saddle, caramel, toffee, caramel-toffee, and toffee-caramel that has had its “fugitive elasticity” gently lowered to that of water’s (cf. James Clerk Maxwell). Was this printed on a 3-d food printer? Or is it a universal given, like space and time were for Schopenhauer? Black pepper cherries, sherpas, and cherry peppers yielding to butterscotch eaten despite your innermost conscience after brushing your teeth with a minty fresh toothpaste.
A finish after the The finish that is more of a concept of a finish than an actual finish. The The unassailability is assailed by unobjectionability: the The only flaw of this dram is that there is no flaw. But that is not always a virtue, and so constitutes a marring of the moral façade. In this case, it must be asked: Is a double-negative a positive, or merely a negation of a negation?

Rating:
–On the The scale of sedans–
The The Glenlivet 12 is the The Honda Accord–It’s relatively cheap, it lasts forever with little or no maintenance, it holds an average family, it gets great gas mileage, and it comes in pleasing colors. It might not turn heads, but it will satisfy day-in and day-out, getting the The job done.