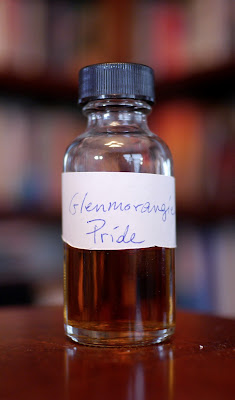 Tasting notes:
Before opening the sample, already deep in his cups, when learning that the Glenmorangie Pride was next up in the Malt Cave, one of the Impostors (name withheld to protect the guilty) exclaimed, “What is this, a commemoration of the 44th anniversary of Stonewall?! Is it a rainbow-colored dram?!”
The binding and gagging of that Impostor complete, the other two opened the very, very small sample (so don’t be envious) and got to work. The nose was nose-y, and by that I mean that it was the prototype for a perfect nose; that while perfection on this Earth is unobtainable, we dream and create models of our dreams. My dream, then, if you must know, was of boiled cedar-smoked bacon floating on a raft made of singed Andalusian orangewood and Thuya burl on an alpine snow-melt and unchill-filtered pear juice lake. Decorously dotting the shores, vaguely seen and lightly wafting on the breeze, the scents of bikini-bottom clad tanning bodies, oiled with Hawaiian Tropic®—or were they Speedo®s? A lemon chiffon (powdered sugar) pie is also floating by on a miraculously non-soggy piece of solar-singed Melba toast. Toffee clouds, a light mist of smoked Salvelinus namaycush, and the alpenglow of pure first-kiss bliss.
The mouth-feel was…mouth-y and feel-y. (Platonic forms, no perfection possible, slaves in the cave—but what a grotto!—etc. etc. etc.) Koala paws stuck in The El Pozo Caramelo Toffee Pits of Australia, fossilized like petrified wood, especially if the wood was salvaged from Noah’s Ark, kept inside a nectared Citrus paradisi in Barbados until it reached teak fruition.
[Stephen: John, does that last sentence make any sense? Any sense at all?]
[John: Mruphh! Grrrgnmphfff! Shhhvvllnngph! FRRRGGhhnmpphffmmnkk!]

Gentle Readers, please ignore them and follow me on my factual flights of fancifulness. Exotic Egyptian fruit cream soup made with the richest stock imaginable, as preserved in the recently-unentombed cookbook of Cleopatra, who in it advocates rendered Minotaur and Brontosaurus bones, cooked in skull of whale with ambergris and spermaceti.
[Stephen: John, even though it’s from a sperm whale, should “spermaceti” be relegated to maltgonewild.com?]
[John: Mruphh! Grrrgnmphfff! Shhhvvllnngph! FRRRGGhhnmpphffmmnkk!]
[Stephen: John, you’re repeating yourself.]
The finish is finish-y, what a finish would aspire to, if it only could. Smooth, yet gently tumescent, like menthol, but without the taste. The surface texture of a stolen Vermeer lovingly caressed by a rogue billionaire. It just goes on, a sunset coyly awaiting a green flash, which may or may not ever come. Does it matter? It does not. It lasts and modulates while charming us, flattering us, and shattering our preconceptions, much like Anton Ego’s amazing monologue (at the 56 second mark on the link) near the end of Ratatouille.

Rating:
–On the scale of great master/pupil-master/pupil-master triplet chains–
The Glenmorangie Pride is Socrates/Plato/Aristotle–It is hard to imagine a greater triplet chain…Oh dear Lord! Please send us another 100ml of the Pride! I literally have no Pride left!
[Stephen: Nice, Bill.]
[John: Mruphh! Grrrgnmphfff! Shhhvvllnnggph! FRRRRGGGhhnmppphffmmnnkk!]
[Stephen: John, you’re still repeating yourself.]

Our thanks to David Blackmore and Glenmorangie for the sample!