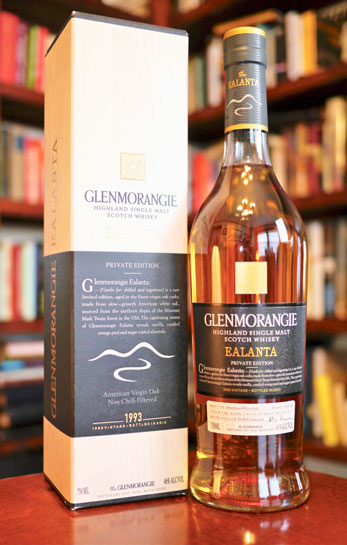 Tasting notes:
True to our Impostor method, which eschews actual research in favor of our wholly uninformed intuitions, we liked to think that the name Glenmorangie chose for this expression means “Hotlanta” in Gaelic and “Atlantis” in Doric, thus simultaneously referencing a mythical fantasy and my own personal version of hell on Earth.
Fortunately, there is absolutely nothing about the whisky’s flavor profile that evokes the aforementioned God-forsaken Georgia city.  The nose is very delicate, like tiny, freshly-baked cupcakes.  Or lemon butter.  Or the pistils of flowers.  Or stamens.  No, definitely pistils.  A whole cache of pistils.  But you know what they say: “Pistils don’t pollinate flowers, bees do.”
On the mouth, there’s gorgeous wood alongside sugary fruit with an undertow of savory.  Imagine a paradigmatic oak tree whose roots have penetrated the grave of John Candy, so that now a slightly fatty sweetness courses through the xylem and phloem to the point that you’d get cherry syrup if you squeezed the veins running through the leaves.  There are also notes of pears baked in tawny port, of an herb seedling extending a fine network of white roots into a lush, black soil.  But saying that much doesn’t even begin to do the mouth justice.  It oozes refinement and elegance.  It is precocity unmatched, despite the fact that it’s a 19 year-old whisky.
The finish presents with unexpected spiciness, bringing to mind the place I imagine peppercorns come from (I’ve refused to research that as well, preferring the exotic locale I’ve dreamt up for this purpose).  Actually, now that I consider it further, saying it’s spicy is like saying baseball is good.  It’s also simultaneously and remarkably refreshing on the finish, like fresh-squeezed carrot juice produced by flop-eared bunnies at a café in Geneva (perfectly fair-trade, of course).  This is a dram with a lot going on, and we were more than happy to let it go on and on.

Rating:
–On the scale of Mark Twain book titles repurposed as adult film titles—
The Glenmorangie Ealanta is A Connecticut Yankee in King Arthur’s Scrodpiece—In part this one had to go the way it did because of declining cod populations.  But beyond that, you can judge for yourself how good of a title that would be.


Our thanks to David Blackmore and Glenmorangie for the sample!