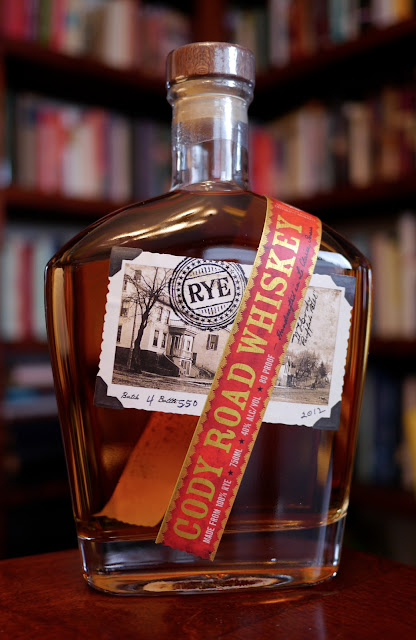 Tasting notes:
Nose this rye for a few minutes, and it’s obvious what the recipe would be for duplicating it: Start with a riding lawnmower, convert it into a vacuum cleaner, attach the HEPA filtration bag you designed especially for this conversion, ride said vacuum cleaner into a recently harvested hay field that has nothing other than millet strewn across it, then turn on the machine and ride around for 8 minutes, waving your cowboy hat in the air.  Once vacuuming and hat waving is complete, remove the HEPA bag and slice open with a Bowie knife.  No, do not use a kitchen knife, and for God’s sake, don’t use a Ginsu.  Place three baby backs of back bacon into the splayed HEPA bag, careful to line them up so that each runs parallel to the next.  Then slather with peppercorn syrup (which itself is made up of 1 cup peppercorn essence, 1 gallon of water, and 1 cup of Sugar in the Raw™ brought to a boil and then reduced to one thimbleful of syrup–for this recipe, you might need to make multiple batches).  That’s the recipe if you have all day.  If you’re in a hurry, just place finely polished white rice (you might want to hand polish each grain the day before for this quick version of the recipe) between slabs of wet plywood, pepper generously, then wrap in wet cardboard.  Needless to say, the quick version rarely tends to come out as well.
Taste this rye, and it’s like someone took the nose and added drops of peppermint oil and cinnamon extract.  Between the loads of sweetness, there’s loads of peppery spice.  Actually, it’s the other way around:  there’s pepper at first, then sweetness, then pepper pepper pepper, rendering it a sweet pepper sandwich (the pepper here is the bread, for anyone straining to follow the metaphor).
The finish burns with spice for a minute, maybe more, then fades away.  This rye whiskey goes to a dancehall looking for a cocktail partner, and with that fiery attitude and swagger has no trouble finding beaus.

—On the scale of 100% wry characters–
The Cody Road Rye (Batch 4, 2012) is Calvin Trillin–Not as timeless or as accomplished as Mark Twain, but sharper and edgier than Garrison Keillor (and less apt to annoy you with a folk song that you don’t want to hear).

Our thanks to the Mississippi River Distilling Co. for the sample!