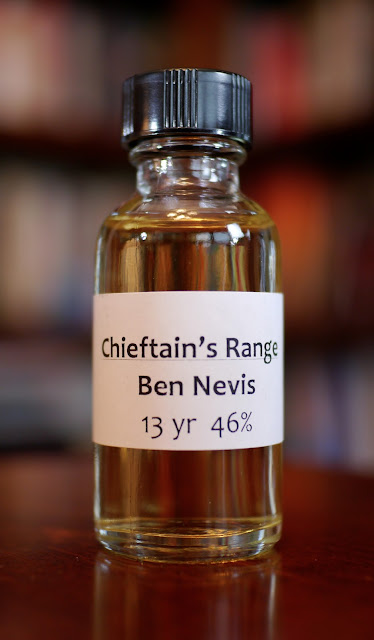 Tasting notes:
Floral, sandstone, jasmine.  These are the notes that form the nose of this Ben Nevis expression selected and bottled by the Chieftain’s Range.  Stirring the band to action is a conductor comprised of stewed plums spread on a dry cracker.  The recording engineer is white asparagus tips left on the edge of an otherwise fully-eaten salad Niçoise.  We found that it smells different from each nostril.  Does that say something about the whisky, or about the recording engineer?  A quick check of his resumé (assistant to the sound engineer for ELP’s Tarkus) confirms our sense of the remarkable olfactoral separation.  What of the mouth?  In a word, it was an exceptional performance captured in a single take.  Delicate, brilliant, radiant; it has all the grace of a sacrament.  There’s also wood from a grapefruit tree carved with a bowie knife by David Bowie in Bowie, Maryland and sold “exclusively” at Walmart’s flagship store in Flagstaff, AZ.  A touch of bitterness on the back end of the mouth, like the curious mix of disappointment felt at your boss after the holiday party when your crush was revealed at the same moment of your bonus was announced.  The post-production team was a series of cinnamon sticks, this being our way of saying that we found cinnamon on the finish.  It is a spicy, somewhat cloying finish.  Imagine flames chasing the hero, who outruns the rolling ball of inflamed spice and leaps into a thicket of yellow grass.  He regrets very much the powder from an Egyptian urn that he put into instant iced tea packets as a fraternity prank.

Rating:
–On the scale of explanations of an album name that are stranger than the artwork itself–
The Chieftain’s Range Ben Nevis 13 year is Keith Emerson’s discussion of the tank-betreaded armadillo after which the album is named: “It had to have a name. Something guttural. It had to begin with the letter ‘T’ and end with a flourish. ‘Tarka the Otter’ may have come into it, but this armadillo needed a science fiction kind of name that represented Charles Darwin’s theory ofevolution in reverse. Some mutilation of the species caused by radiation…’Tarkus’!”