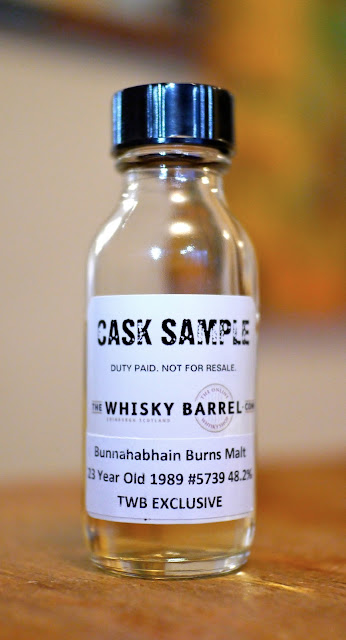 Tasting notes:
Oh man, is the nose on this bad boy ever crazy: a mango flavored lollipop from the bank, still stuck in the pneumatic tube.  Don’t ask how I know what that smells like: I know that smell well, and I have the scars to prove it.  Continue to nose this dram and it pivots hard from the lollipop to notes of Nehi spilt on a silk dress, which is then hung on a line to dry without ever rinsing it off.  That’s not a very hard pivot, you say?  How do you know how things smell from inside a pneumatic tube?  You didn’t happen to spend the latter half of 1989 in various “sleep studies” at Johns Hopkins, did you?  Never mind.  The fruit on the nose evolves quite improbably and nearly imperceptibly toward a funnel-shaped corn chip (Hellooo, Bugles®!) filled with chive cream cheese.  Or maybe it’s chav cream cheese (not to be confused with chèvre cream cheese, despite the natural and obvious connection between the two).  The mouth is a set of colored pencils with leads made smoother and creamier by mixing them with Brazil nut butter and then re-inserting them into their hexagonal wooden sheaths.  No, I wouldn’t know anything about pulling the lead out of a while set of colored pencils over and over again–why do you ask?  You weren’t a participant in that baldness treatment study, too, were you?  At any rate, now imagine those pencils being used to illustrate the Battle of Hastings on the inside of the back panel of a mahogany wardrobe used to store Uncle Ned’s raccoon coat from his days as an Ivy League football fan.  That’s the middle of the mouth.  Then that set of flavors bleeds inexorably into clear flavors of hominy grits right in front of you and a grapefruit being mangled in the distance.  The mouth heads into the finish with unabashed caramel-ness, the kind you’d expect to find on the hooves of the bovine employees of a confectionary that promotes its chocolates as “kinda free-range”.  What’s that?  Hey, I was only in that synaesthesia study for a week, ok?  The finish fans out like ripples on a pond at twilight, topped with highlights of moonlight.  The finish is a strobe light on a rheostat, set to modulate the effects of the bulb in such a way as to produce a consistently rich, deep, warm light of remarkable quality.

Rating:
–On the scale of great books with unreliable narrators that are a little more annoying than they ought to be–
The Bunnahabhain Burns Malt 23 Year 1989 TWB Exclusive is W. Somerset Maugham’s The Razor’s Edge–This dram is so damn good, I would’ve gone with The Catcher in the Rye, but I couldn’t manage to write a narrator who was that engaging and who didn’t grate on my own nerves a bit.  My apologies.  Don’t hold it against this whisky.  You’ll flat miss out if you do.