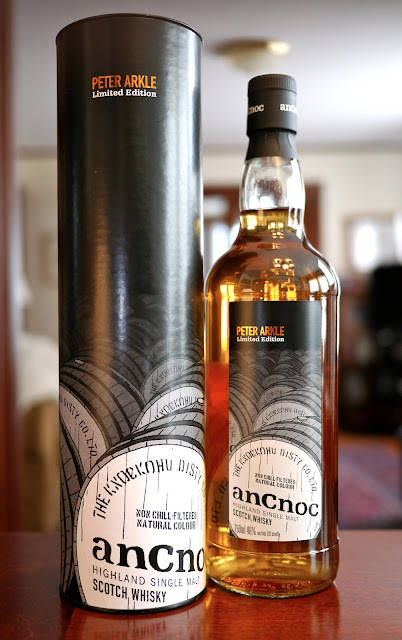 Tasting notes:
Recent speculation about a decade-old discovery at the bottom of the English Channel has set the world of Viking Studies abuzz.  We are talking about the Alderney Crystal, of course, and if you’ve seen it, you’ll agree that it bears more resemblance to a slab of cave-aged Gouda than it does to crystal; four centuries underwater have clouded the calcite slab.  But in its heyday, when held up to a cloud-filled sky, it could help determine the location of the Sun, and this in turn made it useful for navigation.  Is the Alderney Crystal evidence that the fabled sunstone was in use in the late 16th C.?  And ought it to be celebrated if this ship was successfully navigated to the bottom of the ocean?
These were the thoughts in our minds as we swirled the anCnoc in our transparent Glencairn glasses, firm in our belief that Viking sailors aboard a snekke or knarr would have done well to dip their hardtack into this dram.  Then Bill tells us that the Vikings routinely sailed without provisions, raiding the settlements on shore when they needed to fill their bellies.  I’m quite sure I would have joined them if there was a chance to enjoy this special anCnoc expression.  It has all the scotchy offness of a beloved single malt, with perhaps a brief finish in a molded sherry cask.  Musty, we might say, like a summer house after a winter of neglect (Malt Mission 2007 #69, Dr. Whisky blog, April 26, 2007).  Still thinking of the Viking sailors, the nose is their well-worn Ugg boots like the ones Tom Brady gave to his linemen, but after they’ve walked through trays of stewed eggplants with citronella torches during a rookie hazing prank.  The mouth is cayenne pepper custard, which is to say creamy and spicy but not in the way that pimento cheese is creamy and spicy.  An autumn leaf pile set ablaze with a magnifying glass.  The finish is the return of the Viking sailors to their home but forgetting not to raid it.  Which is to say, wet logs, fired ceramic, a spring thaw, and a dried flakes of Sirah (pre-phylloxera roots) in a glass from the night before.

Rating:
–On the scale of unusual properties of calcite–
The anCnoc Peter Arkle Limited Edition is birefringence–How cool is it that a naturally occurring mineral can polarize light and help with navigation!  Plus, as Woody Allen always said, it immediately doubles your chances for a date on Saturday night.

Our thanks to Brian Johnson and InterBev for the sample!