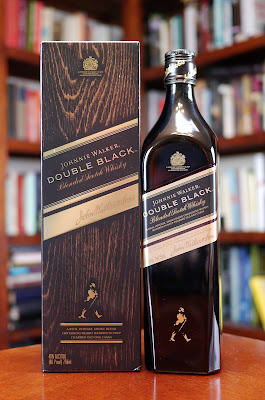 Tasting notes:
I’m all in and doubled down on the Johnnie Walker Double Black. Here’s why: the nose is classic JW. Reedly, like the reed of an ebony clarinet with polished sterling keys being played by Ed Reed—yes, the Baltimore Ravens safety—after drinking Cuban café con leche, but without much leche. Anise being added to a steel smelter by a disgruntled Wobbly who’d had his head banged by a Pinkerton detective during an earlier union action. Faint lemon rind twisted slowly, slowly in the wind instrument. It’s a distinctive nose, not superficially attractive, but laden with character, like that of an urbane Venetian doge ruling in the period before poison was commonly used as a tool of statecraft and revenge. Flecks of lilac honey dried on an alabaster kitchen counter, impervious to the batting paws of a catnip (Nepeta cataria) crazed kitten (Felis silvestris catus).
On the mouth, smoothly insane, insanely smooth grainy grains. Smokey and charcoally, like Smokey the Bear presiding over Bambi’s venison remains at the inquest on site at the ashes of a burnt-to-a-crisp climax forest.
The finish suggests Tennessee, grilled sausages, the fatty and delicious burnt skin of chicken grilled over beech wood, cigar butts, and a middle-aged man’s satisfaction at finally sky-diving. On the finish, Braeburn apples [Stephen: There he goes again with the Braeburn apples. Doesn’t he ever eat any other kinds of apples?] baked en Croute with honeydew, a coke spoon’s worth of crushed candy cane, and raclette cheese. It’s rich, but not Warren Buffett rich. Maybe like Steve Wozniak? If I try to imagine what was in the mind of the Johnnie Walker master blender, it wasn’t to mount a direct challenge to Islay whisky, but maybe to create a blend that would appeal to someone who is on a rigorous course of anti-aversion therapy to phenols. In other words, there’s peat, smoke, a hint of koala breath and charcoal, but not so much that it would whiten the hair of a sherry-swilling aesthete.

–On the scale of weird Armenian meat pies…wait! We did that before!…sorry.

—On the scale of bold steps from a venerable giant–
The Johnnie Walker Double Black is Henry Wadsworth Longfellow’s exuberant youth joyously shouting, “Excelsior!” (Minus, of course, the impetuousness, the shocking conclusion, and the grim overtones limning the clash between wisdom and naïveté.)–Excelsior! Excelsior! Excelsior!