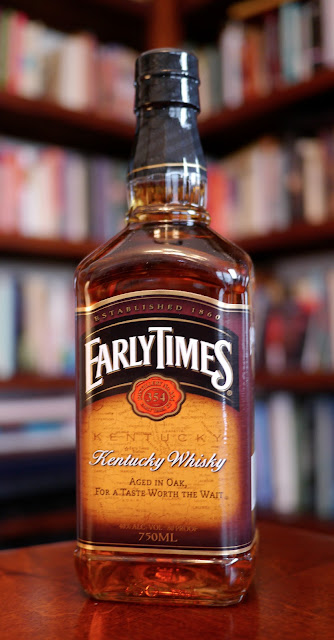 Tasting notes:
On the nose, hamster bedding fresh from the bag.  Chicory coffee.  Cut Granny Smith apples encased in silly putty.  Vulcanized rubber.  What is this delicious stuff?  On the label it says—

–my God!  It’s a 36 month old!  Okay.  Deep breaths.  That’s got to be [fiddles with abacus], that’s 73.6 years!  Can American whiskey (or American whisky) even get that old?  What’s that, Bill? [plugs in numbers into Bill’s calculator], ahem, yes; just as I thought.  Three years old.  But then I see it’s not a Bourbon.  This is because the spirit is aged in new barrels as well as reused barrels and, I’m quite sure, several silly putty plastic egg containers.  Clearly, the used barrels are imparting a decidedly Bourbon flavor profile to the whiskey: A white chocolate Gumby dribbling a bison-leather basketball on a mahogany parquet floor.  A sun-filled musty attic filled with quilts and empty hat boxes.  A dish of brazil nuts.  It’s light on the mouth, but not quite like an angler fish.  On the finish, it’s the acorns in a red squirrel’s nest conveniently placed near the nest of an exasperated, nut-collecting bowery bird.

Rating:
–On the scale of stylistic impasses–
The Early Times Kentucky Whisky is whether brazil nuts should be capitalized or not–The three of us were divided on the question, one saying yes, the other no, and Bill emptying the dish into his mouth and then trying to act natural.


–Our thanks to Andrea Duvall and Brown-Forman for the sample!