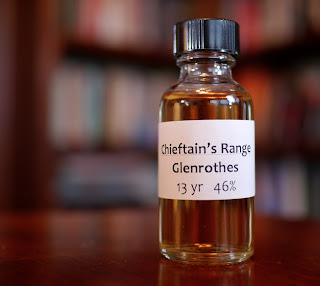 Tasting notes:
The Chieftain’s Range Glenrothes 13 year old opens with a shocking, but not unwelcome, caramelized orange soup ladled lavishly on your lascivious lover’s rump and down her décolletage Mahal. (Maybe Agra-vating to her?) A magnificent panoply of spices—nutmeg, mace, and birch bark formerly used as papyrus to write out a curse—intermingle with the yak-cream and secretly slaughtered sacred cow-based broth. A gentle rain falls from summer clouds seeded by cloves to end the unwelcome drought. Perfumed narwhal musk sprinkled as an aphrodisiac on the butter-rich angel’s food cake made by your aunt for your uncle on their 25th anniversary (the “Angel’s food cake” one). [John:  Bill! The 25th is the “silver anniversary”!] No fruit compote required!
On the mouth, the interior of a walnut shell used by enterprising (and cute) chipmunks to scoop gianduja gelato out of lily pad jars into acorn hat bowls. Despite the way it sounds, I’m not currently watching Walt Disney’s Fantasia or any other cartoon; whisky reviewing is serious business. Tiny moss tendrils lovingly woven by bored six year–olds into place mats for a dolls’ tea party. (Unfortunately no one ever comes to the tea party, because there’s no tea, because tea partiers think that the tea should just flow from John Galt’s tear ducts whenever he learns of a government project. Who is John Galt? Not you, angry and thirsty Tea Party doll.) More moss: A mulching Moss Man Festival counter-programmed in the Olympic National Forest; alas, only organic gardeners who use artisinal local herbivore fertilizers are invited. Spray mists of lemon esters substituted as a prank into automatic sprinkler systems. Shocking, but not unwelcome: The inner sanctum incense burned only when Popes retire—Va bene, Cardinal Agustoni, release the Kraken! I mean, dust off the 15th century thurible! [Stephen: Bill! There’s no such special incense!]
[Bill:  Stephen! How do you know?! How can any of us know? Quit kraken me up with your unfalsifiable claims, you anti-Epistemologist! Let me finish the review, va bene?]
The finish is your carmelized-orange-rumped lover sexily strapping you in a silk straitjacket after whispering unmentionable promises to you, and then instead prankishly rolling you in moors of heather until you’re gleefully disoriented. Lucky for you, she didn’t roll you in a savage briar patch. Nor a Dan Savage briar patch. The sensations abate quickly, like sunlight glinting off of dragonfly wings. Is it gone forever, like lost young love?

Rating:
–On the scale of “Words of the Year”–
The Chieftain’s Range Glenrothes 13 Year is the 2012 winner: gif–Yes, it’s the .gif that keeps on giving, so long as you don’t look it in the mouth, but pour it in the mouth. Dare I say it’s giftastic? I haven’t dared say it, but I did just write it.

Hater’s be hatin’ but lovers be drinkin’ Glenrothes.

* And this is the “Before” bottle