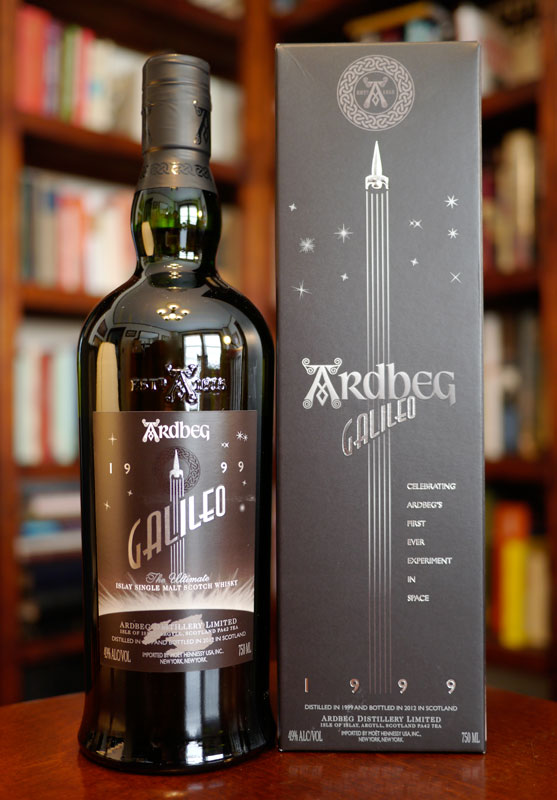 Tasting notes:
This 13 year old whisky is matured in a blend of ex-marsala wine and ex-bourbon casks.  Hold on, that was infelicitous wording: that should not be taken to mean that Ardbeg blended the staves to create the casks for this, though that would certainly be interesting if they had.  Up close, with my decidedly prominent proboscis much further into the glass than my ex-Scottish girlfriend would have allowed, the nose is…  Oh my, I did it again:  to be clear, she’s not ex-Scottish; in fact, she’s decidedly quite currently Scottish; she’s just decidedly not my girlfriend any longer.  At any rate, with my nose in the glass, it’s all cherries and lemons steeped in sangria, then slipped into the cask by an imp drunk on sherry.  From that distance, the nose is decidedly not Ardbegian:  it’s more macerated raisins and cherries, shish-kabobbed for your pleasure, then waved over a nearly dead peat fire.  In other words, it’s like someone whispered peat over it, perhaps with a ionizer used for vermouth and martinis.  Again, though, that’s from up close.  From eight inches away from the glass (that is, as I hold the glass in my hand and inspect the bottle), however, it’s a strong enough peat reek that if I had any hint of on me at work, I’d have to dream up some explanation for it right away:  I just had a herbal colonic that included a great deal of smoked peat for its cleansing effects, and I’m doing everything I can to control my flatulence, but I’m mortified by the lingering odor, and I’d really appreciate it if you would stop drawing attention it. Or something along those lines.
On the mouth, it goes to fairly crazy, but in a good way (for me, anyway).  It’s just like walking through a Maine pine forest while eating a jar of maraschino cherries and egging Billy Corgan on to continue to use his maple-handled sledgehammer to whack at watermelons.  And while massaging a little raisin molasses into Billy’s clean-shaven gourd from time to time just to keep him fired up.  I won’t say how  I learned it, but I have it on good authority that he loves that.  Ladies, take note.
My fellow Impostors found it a bit winey and weird on the mouth.  I disagreed with them about the flavor progressing all the way from crazy to weird, but I did agree with them that it tasted like someone harnessed some sort of cosmic radiation and applied it gingerly to the staves of the casks before filling them.  (That should not be taken to mean there was any hint of ginger in the dram.)  That said, I will admit that the craziness on the mouth is profound and for some, it could be disturbing.  In other words, it’s a balsa wood raft floating down a jungle river with incense and hash and pork dumplings and active opium pipes.  And it’s en route to find Col. Kurtz.
On the finish, the woodiness lingers, with the peat raising its head like a shy prairie dog.  Or is it a pair of prairie dogs?  I like to think of them as twin brother prairie dogs named Peat and Repeat.  Let the jokes abound.  We’re all about them here.

Rating:
–On the scale of über-important historical figures for which one could name a whisky–
The Ardbeg Galileo is Sir Isaac Newton–We managed to go the whole review without building in some grand reference to Mr. Galilei, so we’re not going to go there now.  Plus, without Newton, there would be no rockets and thus no space travel.  And the point is being there, not just looking from a distance.