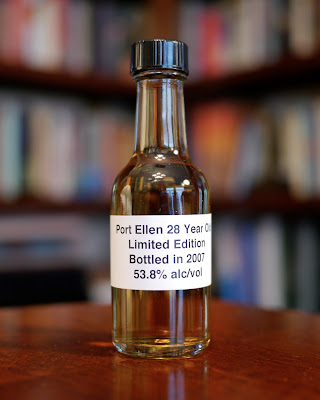 Tasting notes:
Nosing this dram, one is immediately confronted with notes of lemongrass, provided what one meant by “lemongrass” was an actual hybrid of lemons and grass.  Alternately, “lemongrass” here could be the quirky name for a strain of medical marijuana so potent that it induced paranoia in law enforcement.  Oh, and also eased glaucoma discomfort.  We also found on the nose hazelnuts that have been kept in a wax paper-lined bag that formerly held hazelnut coffee beans.  Finally, there’s smoke from an argileh enjoyed on the banks of the Sea of Galilee, piece after piece of vodka-infused watermelon added until you see drunken American politicians cavorting in various stages of undress in the water off to your right.  No, your far right.
That smoke continues on the mouth, like from a fire with wood soaked in alcohol for firing up a witches’ cauldron.  There’s wood and smoke, but buttery richness, too:  imagine a crematorium disposing of Marlon Brando’s body, with the fat rendering…  Too macabre?  Then clearly you just don’t appreciate Marlon like we do.  Really, though, the mouth presents a single, gorgeous note:  it’s a variant of “Taps” composed by John Cage to commemorate the unknown soldier after a campaign during which no one lost his life.
On the finish, the brininess is so complex and rarefied as to feel concentrated over generations.  And not just because the distillery no longer exists.  (However, teasing apart the psychological impact of that fact on our tasting of it is like trying to distinguish Scylla and Charybdis.  Hint:  Charybdis is the hot one.)  We thought we got hints of coelacanth sushi and dodo bird scrambled eggs over a bed of blanched Cry Pansies.

Add a little water, and one magically adds sweetness:  sugar cane with basil, fermented bamboo drenched in honey, smoke from a lava flow of simple syrup.  With water, we also go notes of tannic leather, like you’d expect to get from swallowing a sporran key fob.  Recently tanned?  Untanned?  The sample wasn’t large enough to allow us to pin that down.  On the water-added finish, we get a frolicsome hint of spice, like the faint mist from a bubble bursting next to you as you soak in a tub of chicken tikka masala.  Fantastic.

–On the scale of great quotes comparing one’s personality to a spreadable food–
The Port Ellen 28 Year Old 2007 Limited Edition is “I don’t want to spread the peanut butter of my personality on the moldy bread of the commercial press.”–Like the Port Ellen, it’s a one of a kind.