[The reviewer apologizes for the lateness of this review.  Perhaps “354” refers to the number of days after I received the bottle before typing up these notes.  The good news is that I found my original hand-written notes, which are here faithfully transcribed and without any ex post facto tarting up.  I should also note that during the delay, Early Times (generally, not just the 354) was named the Official Spirits Sponsor of the American Cornhole Organization.  Tremendous.] 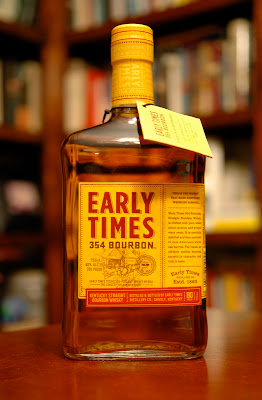 Tasting notes:
The Early Times 354 starts with a deke.  Yup, there’s a head fake of caramel—a Magritte caramel, for those for whom sports analogies are too recherché—and it pulls me right out of my shoes.  Before I can think of the YouTube humiliations this moment will bring, I find the corn.  Lots of corn.  Like Willy Wonka, but if he had a corn factory.  (“I’ve got a corn-y ticket!  I’ve got a corn-y chance to make my way!”  Ah-hem.)  On the mouth this is bright and forthright, like a sweet-talking pickpocket who gets the gold crown off of my #17 molar and disappears into the crowd before I know what’s happened.  Above all, this is highly drinkable.  Is there a wisp of smoke clinging to cotton candy?  Or a delicate layer of dryer lint formed after 55 minutes of battle with a medicine-soaked flannel bathrobe?  I think I’ll have to keep drinking to find out!  You won’t find an exceptionally long or complex finish, and sweetness dominates the spice, but there’s a great deal of honesty here.  I rather like to think that it’s an old-time cure-all that addresses 354 distinct ailments but which also lists the 116 side effects that it has been known to produce.  Would you run the risk of dropsy to be rid of the strangury?  How about grocer’s itch if it freed you from the pestilential morphew?  Roll the dice on podagra for a chance that your quinsy might run its course?  Well, my friend, the Early Times 354 might just be your house bourbon.  Or an excellent gift for your in-laws.

Rating:
–On the scale of outstanding early defenses of simple English prose–
The Early Times 354 is Robert Ascham’s Toxophilus, published in 1545–Writing in plain English, Ascham is critical of his fellow English writers who, using “strange words, as Latin, French, and Italian, do make all things dark and hard.”  Though one critic thinks that English should be enriched in a way analogous to how a feast is, with wine, ale, and beer, Ascham replies: “Truly … they be all good, every one taken by himself alone, but if you put malmsey and sack, red wine and white, ale and beer, and all in one pot, should shall make a drink neither easy to be known, nor yet wholesome for the body.”  At Malt Impostor, we obviously share Aschem’s plea for parsimony, and admire his cri de coeur, and regard it as the antesignano of Strunk and White’s Elements of Style.  Early Times 354, we think Ascham would approve of your arrow-straight integrity!


–Our thanks to Svend Jansen and Brown-Forman for the sample!