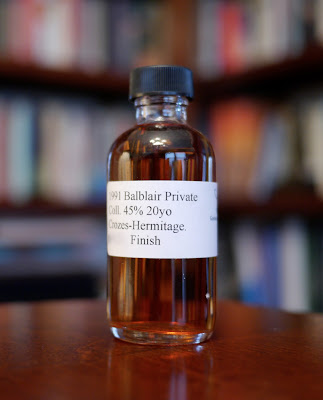 Tasting notes:
As is our Impostorish custom, we prefer engaging in wholly uninformed speculation about certain provenances to actually studying up on the region.  After all, there’s precious little time left after assiduously researching the obscure facts and arcane vocabulary on which our writing style depends.  Such is the case with Crozes-Hermitage, the place from which the finish for this lovely Balblair originated.  “Crozes”, as it turns out, are the grooves inside of casks into which the heads fit to help make for a tight seal.  So far, so appropiate.  But then a “hermitage” is a habitation of a hermit or–oxymoronically enough–multiple hermits (the latter being known in some circles as a misanthropy club).  So are we to understand Crozes-Hermitage as a barrel groove living alone?  Is that even possible?  Is that like the sound of one hand clapping?  Whoa.  That’s really deep.  And deafening.
As is also our Impostorish custom, we always feel at liberty to stop suddenly and plow off in a new direction or to veer sharply, thus imperiling the tenuous narrative threads we very nearly always accidentally find ourselves weaving (Woohoo! Four adverbs in a row! Score!).  Such is the case here as well.  Baffled by the questionable and potentially metaphyiscally problematic provenance of casks from “Crozes-Hermitage”, we moved on to nose the dram and taste it.  On the nose, we got craneberries.  That’s no typo: Early European settlers called cranberries that when they first encountered them, thanks to the shape of the blossoms.  So yeah, we got craneberries; that is, we got old school cranberries, the hardcore, longstanding New England kind.  This would be the Cliff Claven Sharp varietal, canned in cherry cranberry sauce.  That’s what we get on the nose–at first.  Then the “hermitage” part suddenly becomes clear to us:  the note is of a lone cran(e)berry left on a tropical beach to see if it makes friends with coconuts and pineapples.  It doesn’t.  In true hermit form, it crawls instead through the bunghole of a musty, neglected barrel that once held grog and sets up habitation there.  Hey, at least it was beachfront property.

[Tires screech, several G’s worth of force come on all at once, whiplash ensues] On the mouth, this dram is wonderfully aggressive with red fruit.  It’s Conan the Balblairian on a quest to beat the Stoicism out of the Swedes (Good luck with that, dude).  The drying, tart finish of lingonberries mixes with the dank earthiness and wood on the mouth like this Conan’s early encounter with the SJMG (Swedish Jam Makers Guild), armed as he was with nothing more than a large piece of freshwater driftwood.  [The steering wheel spins, massive force from the opposite direction, tires struggle to grip the road back in the original direction…]
On the finish, there’s more red fruit, if you can believe that.  A sake and raspberry jam reduction.  Cinnamon red-hots in juniper, burned together during sand paintings.  It’s a truly haptic finish, not unlike trying to eat raspberry jam through a sock.  Despite the wrong impression that last description might give some of you (mostly a risk with the uninitiated), as we sat and tried this together, we found ourselves murmuring “Oh, this is lovely,” in unison.  As in all at once.  That means it’s true.


Rating:
–On the scale of relative sweetness–
The 1991 Balblair Private Collection 20 yr. Crozes-Hermitage finish is the saying “Life is sweet”–not all the way to syrupy, and certainly not saccharine sweet, it’s a wonderfully balanced, if not profound, comment on our existence, and one that we would all do well to keep in mind.


Our thanks to Chris Reisbeck and Gordon & MacPhail for the sample!