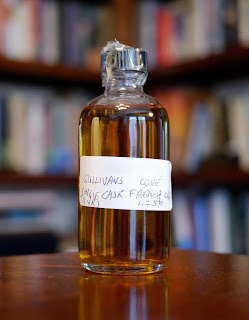 Tasting notes:
This dram presents a lot of fight up front, like that of a civil war or an ex-mistress.  It is a French war, after all: imagine a reenactment of the Battle of Waterloo, just without the disastrous consequences for anyone involved. Winey on the nose: more French (I feel a theme coming on) than Gilbert Gottfried.  But heat in there, too, like unagi sushi with wasabi and killer soy sauce.  On the mouth, it’s really smoothly balanced and luscious like your paramour’s silk sheets wrapped around an omelette (“Now that’s a breakfast burrito!”) or an entire eel prepared like a Möbius Strip just to keep you from orienting it or yourself.  There’s also a touch of smoke like a failed match strike or a dud firework skewering a juicy raisin.  In light of that last bit, we invited Robert Parker to comment, but he demurred, thanks to a perfectly rational fear of losing a finger.  On the finish, we found a hint of pear.  Flambéed.  With spiced rum maple syrup and chai-flavored licorice.  In a slightly under-ripe wheel of Camembert lying on the edge of a cliff in Normandy, just taking in the view.  Yes, it’s wistful like that.  Exactly like that.

Rating:
–On the scale of things with German names that would make a French person uncomfortable–
The Sullivan’s Cove Single Cask French Oak 11 Year is not the Möbius Strip–Luftwaffe? Definitely. Wienerschnitzel? Usually. Volkswagen? Not often (especially when you consider the Renault).  But Möbius Strip? Pas du tout: Quelle élégance!

–Our thanks to Raj and the good people at Purple Valley Imports for the sample!