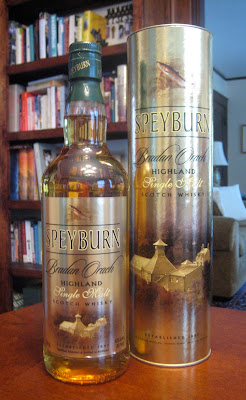 Tasting notes:
The Speyburn Bradan Orach Highland Scotch Whisky presents like fermented almond butter spread with sour cherry jam on sprouted wheat bread, served up by a demented macrobiotic vegan who kidnapped the normal lunchroom assistant. Not content with the healthiness of the preceding, next up on nose-menu is a smoldering bowl of Rosebank Farms heirloom oatmeal fired in a kiln with a single moist ceramic bowl, seeking a kinky raku + Lemon Pledge™ glaze.
“It does exactly what it says on the tin.” That is, it Speyburns you, then Bradans your horizons, Alas’s your poor (Y)Orach, then, er, Highly lands you in trouble. With the angry landlord, that is, who is demanding to know what all the clattering, blending, and pureeing noises are (especially combined with the quadrophonic yowling of recordings of whales and ferrets that you play because they’re really fun to dance to).
This is a dram for mixing with some water; it’s happier with ice cubes, and content to be swigged idly while catching up with your broker on the merits and demerits of investing in the resurrections of the Yugo and Trabant auto manufacturing plants. As he drones on about the falling Euro, the need for cheap alternatives in which to motor around the lochs, etc., etc., you become aware of the raw sugarcane of the finish; reedy, sinewy, thin: an iceball flavored with pine resin and lemon bitters. Best in the summer? Best in the winter? Best tooling about the heaths in a (hypothetical) late model flaming red Yugo with whitewall tires, a rear spoiler, and leather seats? Ultimately, each of us must make these choices on our own.


Rating:
–On the scale of potted plants–
The Speyburn Bradan Orach Highland is the fern–It evokes the jungles of the dinosaurs, the rainforests of macaws, and it fits in comfortably at home, at the office, and at fern bars. Duh.
–Bill

Our thanks to Brian Johnson and Interbev Group for the sample!