[Here is another in a long line of current offerings from the Scotch Malt Whisky Society.   (We’re still using the Lo-Mob effects on the pics for these.)  Check out the beginning of this other post for more on these reviews.  If you want to find out more about the SMWS or their bottlings, visit www.smwsa.com] 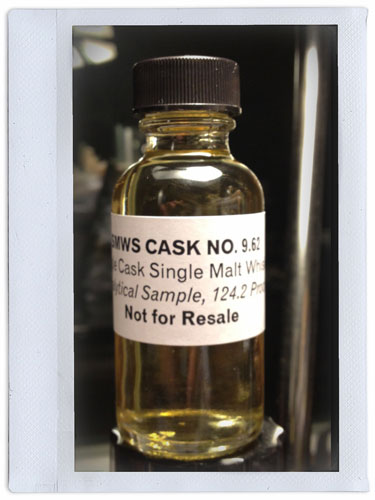 Tasting notes:
On the nose, it’s toasted cashews bathed in lime butter, swirled in the mouth of a Caravaggio model before being spit into a wooden bowl filled with grappa mixed with limoncello.  The bourbon cask vanillins dance amid lemon infused cotton candy–and they get sticky along the way.  The nose is so sweet and fruity, one must drink.  On the mouth, coconut cream with vanilla-wafer-and-banana-slice Oreos™ soaked in simple syrup.  There’s also hints of a pineapple liqueur laced with essence of habanero–so many hints, it’s as if someone‘s trying to tell you something.  Because she is.  The finish is relatively short, but peppery powerful and fleetingly tactile on the middle of the tongue, like every bite of Mexican food I had last time I was in Austin, Texas.
Remember the last hot young thing you met?  This dram was probably nothing like that.  And that’s a good thing.  Don’t know what I mean?  Get a bottle, go hit some clubs, or both.

Rating:
–On the scale of deceptively complex desserts–
The SMWS 9.62 is my grandmother’s homemade banana pudding–Lining the dish with store-bought vanilla wafers is the easy part.  Making basic pudding from scratch, however, is another matter.  But if you’re really attentive and work at it, it’s really worth it.