[Here is another in a long line of current offerings from the Scotch Malt Whisky Society.   (Behold the Lo-Mob effects on the pics!)  Check out this other post for more on these reviews.  If you want to find out more about the SMWS or their bottlings, visit www.smwsa.com] 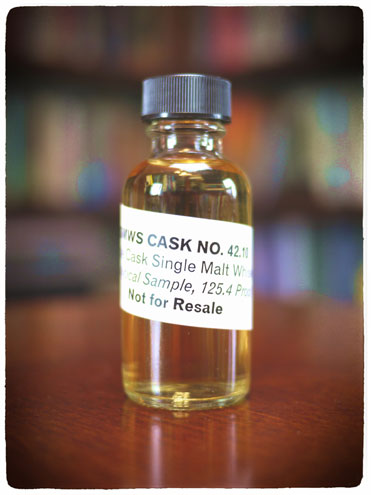 Tasting notes:
I get furniture polish–albeit the really good stuff–on the nose, but, you know, the lemon scented kind.  But it’s rounder and creamier than that. No: I bet that really good furniture polish is creamy, though, and at the microscopic level or the karmic level or the Marx’s fixation on artisan-style labor level it’s beads or a perfectly enclosed circle or whatever the hell it would take to make that last one round, respectively.  This is peated whisky just getting warmed up.  In the mouth, it’s plenty round, too, and alfredo sauce creamy (you know, the egg makes it stand up a bit?).  But only if that alfredo had just been served and it was one of those times when the waiter started cranking on that over–sized pepper mill at your table, waiting for you to say when, but your inane argument with your friend over the metaphysics of tropes distracted you from saying when before the waiter gave up in a momentary flash of disgust and pleasure at having nearly ruined your meal for you.  Let it sit for another moment, and the nose and mouth have evolved into the same species, and that species is pink grapefruit creamsicle, but one with no stick, because Gary the ice cream truck driver doesn’t want kids to be getting all soft because they had everything made easy for them before they became adults.  You didn’t get that last part?  Try again, it’s in there.  And the finish.  The finish steals out the back window after igniting a cloud of peppery spice to distract you.  In this case, the spice bomb only sputtered a bit and then died on the living room floor in a vain attempt at existential irony.

Rating:
–On the scale of underrated artisanal labor–
The SMWS 42.10 is noodle making–Bakers get all the glory, the cheese makers all the love, and the noodle dudes just sit in the back and hope to get sauced.