[Here is another in a long line of current offerings from the Scotch Malt Whisky Society.  We didn’t get to the last batch in time and were lost.  Alas.  But we’re back now, rockin’ the Lo-Mob effex on the pix.  Check out the beginning of this other post for more on these reviews.  If you want to find out more about the SMWS or their bottlings, visit www.smws.com] 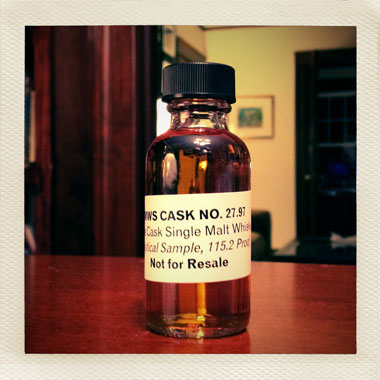 Tasting notes:
This has got some stankiness in it. It’s like a daub of belly button funk scooped out with a Sterling Silver Gorham Japanese Nut Picker by a bored baby sitter in greater need of supervision than her charges.  Or a Buzzbee™ flying disk tossed too far from the beach and into sparsely attended ceremony of a couple renewing their vows after only 17-months of marriage.  I’m struck by the density of the whisky from nose to finish; it’s a lead-filled yam that shatters the rifled barrel of a potato gun.  On the mouth, half-popped popcorn kernels soaked in Armagnac and then strung together on a Christmas tree by truly inspired mice.  Less briny and more estuarial.  A bank pen once used to write the words “give me the mony [sic]” on a deposit slip that prompted the teller to smirk, but more recently having touched the palm of a carnauba wax middleman.  Candy corn candies rolled flat then shaped into tiny figurines and placed in scenes from Synechdoche, New York (which is to say, there were dioramas inside of dioramas).  The finish reminds me of that sow’s ear dog treat chewed incessantly in the back of a Datsun travelling from Wetumpka to Sylacauga on Alabama 9 North (which is also Alabama 38 West and US 280 West), then left to dry and nearly reconstitute itself in the afternoon heat.

Rating:
–On the scale of things that can reconstitute themselves after an attack–
The SMWS 27.97 is Turritopsis dohmii, better known as the immortal jellyfish.–Like the plucky hydrozoan, what this whisky brings would sooner undertake cellular transdifferentiation than disappear into a gustatory memory book.