[Here is another current offering from the Scotch Malt Whisky Society (as always, with Lo-Mob effects on the pics!).  Check out this other post for more on these reviews.  If you want to find out more about the SMWS or their bottlings, visit www.smwsa.com] 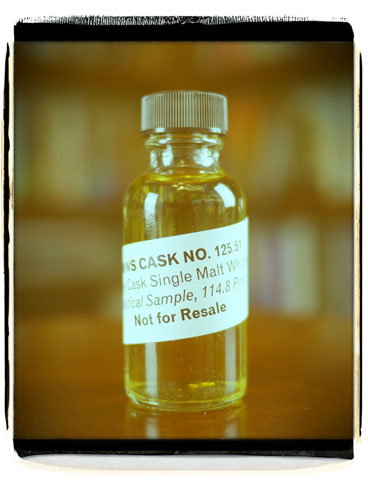 Tasting notes:
Nosing the SMWS 125.51 brings pork chops (not with sauerkraut) at the forefront and an immaculately polished oak door, rubbed with Murphy’s Oil Soap, at the back. Betwixt and between? Bebaffled, befruited, and bestyrofoamed. Green tea leaves steeped in wombat warblings. The announcement of the Götterdämmerung. With the passage of time, as I look up the proper placement of ümläüts, a shy clementine softly announces itself. On the mouth, every jelly bean flavor at once! My brain is still sorting them out, and my tastebuds are reeling. How is it possible to pack all the Juicy Fruit™ flavors into one sip—and I mean those flavors before too much munching and mulching has occurred. It’s impossible to distinguish the finish from a flambé, and yes, I mean the fiery part of the flambé.
With water: staggering outflows of coconut. Coconut oil, coconut spread, coconut milk, coconut shells on dancing hippos. A faint hint of lime, but I don’t trust that my mind isn’t creating it, as I am starting to sing, sotto voce, “Put the lime in the coconut, and drink a bowl up!” Wow, this must be what the suntan lotion used by celebrity nudists must smell like. On the mouth, boysenberry jam, anadama bread, and lemon lollipops. The finish stays around like someone you went on a date with and married: smooth, pineapple-y, undertone of coconut (again), overtone of bliss.

Rating:
–On the scale of serendipitous discoveries–
The SMWS 125.51 is the Frisbee–According to About.com, which must be true, Yale College claims that in 1820, an undergraduate, Elihu Frisbie, “first grabbed a passing collection tray from the chapel and flung it out into the campus,” simultaneously redistributing charity for the poor back to the elite one percent AND repurposing a quotidian object into the world’s greatest flying object.