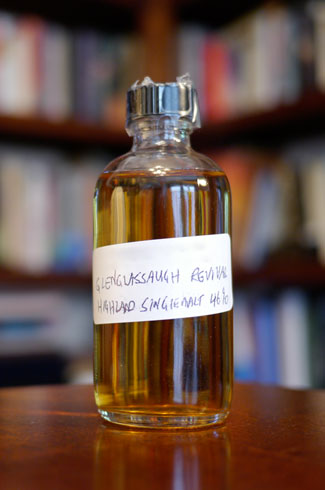 Tasting notes:
On the nose, the Oloroso sherry finish comes through big time.  It’s like walking into a room in which someone has been huffing a super dry, dark red wine—and succeeding at getting loopy on the fumes.  But there’s also green papaya on the nose, alongside palm fronds dusty with balsa wood shavings.  Bill thought he picked up pterodactyl wings on the nose (“You know what that’s like, right?!?”), but faced with our incredulity scaled it back to Komodo dragon neck waddle.  Turns out he was the one huffing the wine.  The mouth impresses from the start, presenting half-petrified lemon slices and cough drop flavored Tic-Tac™ mints.  Or maybe it’s Dimetapp® flavored Jelly Bellies®.  Robitussin® Mentos®?  (Can you believe we get no ad revenue from those folks?!?)  It stays on the tongue for a long time (especially if you just leave it there), offering a wild array of flavors:  green pepper in sesame oil, lemons, a Vienna sausage satay, limeaid, an uncooked piece of bacon begging to be fried up.  From there, the finish fired on for four full minutes—or maybe that 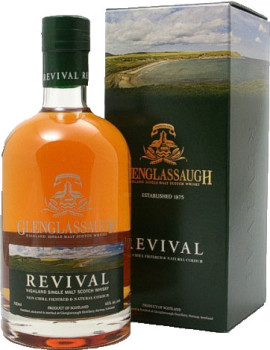 was just the mouth never having stopped, which would mean the finish was short.  It has the kind of drying finish that brings to mind the New Yorker cartoon trope of a desert crawler.  There’s also a brininess alongside a refinement that was hard to pin down:  moral eel (chimed in wine–huffer boy), a large dining room with a harp (not to eat, mind you), or maybe Rebecca DeMoray eel circa 1985.  She’s not holding the harp.

Rating:
–On the scale of promising early performances–
The Glenglassaugh Revival is Tom Cruise in Risky Business—Tom was good in that film, but we contend that it was really Rebecca DeMornay that had the key demographic going back to see the movie again and again.  Ok, he did have some real attitude in the film, attitude that presaged much bigger hits to come.

–Our thanks to Raj and Purple Valley Imports–and Glenglassaugh–for the sample!