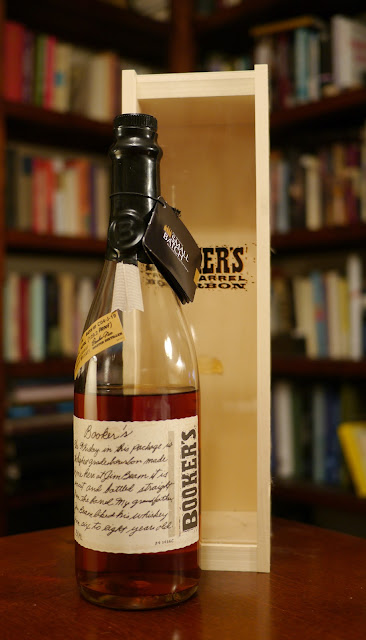 Tasting notes:
We’re gonna start with a big old thanks to Dave for giving this bottle to Stephen.  In return, we’re gonna keep this review simple and honest.  None of those fancy-pants, San Francisco adjectives like our other reviews.  No sir.  What’s that, Dave?  No, there’s nothing wrong.  We’re just squinting at the label to read it all up close.  Don’t you worry yourself, y’hear?  We are just thrilled to pieces to try this.  Besides, Daddy told me to never look a gift malt in the mouth.  ‘Course he was talking about horses.  But I reckon this applies right here, too.
Now that I think of it, Daddy only gave me two other pieces of advice.  “Never sit in a cane bottom chair” and “Don’t say anything bad about another man’s dog.”  The way I figure, those two pearls of wisdom can get you through a lot of what life throws at you.  As for the rest, good whiskey covers a multitude of sins, to paraphrase our Lord.
The first thing I noticed about this whiskey is how it’s just plum full of bourbon.  Maybe that’s not saying much.  But let me explain.  It’s full of the kind of bourbon that you’d find if the Campbell’s Soup company started putting whiskey in cans and told you to add another whole can’s worth of water before you served it.  This is just plain concentrated and all thickened-up like Quaker State oil in a stoneware bowl.  Or Aunt Jemima syrup, straight out of the icebox, on a flapjack.  Or Karo syrup in one the them old, lead-lined tins in the back of that shed over at the Patterson place.  When I drink it, I’m not disappointed.  I get the taste of cherry cough syrup, Breyer’s cherry ice cream, cherry tobacco, green peepers, and rabbit scat.  No!  That thing there about the rabbit?  Just no!  That’s a dad-burned typo is what that is, and I can’t find the backspace key on this darn Appletosh computer.  I’m going to have to get my nephew Reggie down here to fix this.
In the meantime, what I’m fixing to tell you is that this is some great old whiskey right here from the Booker’s people.  After I swallow it there’s just all kinds of flavors happening like a jar of Jane’s Krazy Mixed Up Salt after a big old party where they had too much to drink and the quality control guy up there just lost his way somehow and started putting parsley and that Mexican spice my wife likes [Stephen: cilantro?] and a whole bunch of church flowers and some bits of the wood from the pew where Aunt Flora sits and some musty sheets torn out of the hymnal and dipped into the baptismal font and a piece of those preacher vestments from that traveling minister that wasn’t married no he wasn’t and you don’t suppose and no I don’t reckon but its nothing we need to concern ourselves with.  Like I was saying, it’s got a finish longer than the trail of suspicion attending to that Elmer Gantry of a traveling minister.


Rating:
–On the scale of descriptions found in a recent best-selling novel that would work just as well were it a description of a whiskey–
The Booker’s Cask Strength Small Batch is “Outside, the world became a riot of vegetable odors, boggy and florid–the waft of old hay, tamarack, algae, moss, sweet sap and rotted leaves, iron and copper and worms–a musty yawn that hung in the yard” from David Wroblewski’s The Story of Edgar Sawtelle, page 230.