We missed the exact date of David Stewart’s 50th anniversary in the employ of The Balvenie by a little over three months here, but we’re hoping this tribute has the effect of a belated birthday card filled inexplicably filled with money:  it’s a pleasant surprise and keeps the fun going much longer than originally expected.
It’s no surprise to anyone who knows us well, but for the rest of the world, we are rather ridiculously obsessed with the Balvenie Tun 1401.  You name the batch, and we’re huge fans (excepting the first batch, on which we sadly missed out). Accordingly, we thought that we could offer a unique tribute to the man who crafted them on the occasion of his 50th anniversary with the company by celebrating this most amazing blend of Balvenie whiskies.
Of course, we’d never want our focus on the Balvenie Tun 1401 to mean the neglect of the Malt Master’s more widely appreciated accomplishments:  the Balvenie Doublewood 12 (and the whole popularization of “finishing”), the Balvenie Classic, the famed Islay Cask 17 Year Old, the Balvenie Signature, the Balvenie 30 and 40, and the Portwood Aged 21 Years (and we’re big fans of the Caribbean Cask, too).  In short, the man has contributed something significant to individuals at every point on the full range of single malt drinkers.
But when we can swing it, we here at The Malt Impostor prefer to focus on unadulterated luxury [that’s right:  we frown upon adultery in our quest for the luxe], and in this case, did we ever swing it.  One afternoon late this summer, John, Bill, and I engaged in what John described as “undoubtedly the most luxurious thing we’ve done”:  a “vertical” of Tuns 1401.  The following description of what we discovered is as fitting a tribute to David’s 50 years of unparalleled excellence as we could devise.  We hope you enjoy it, knowing full well that there’s no way your enjoyment could ever come within three postal codes of ours at experiencing these drams one after another.

Batch #2:  We reviewed this one shortly after its release.  For that review, we transcribed our reactions without trying to form them into a coherent narrative, in no small part because this dram has so much going on, the closest to a coherent narrative we could muster would have been completely on the wrong side of Faulknerian—and we’d prefer to keep our readers.  But revisiting it as the whisky leading off the flight, we found it brought a bit of revelation:  the nose presented us with the lightness and refinement of an ultra-premium white wine, but without the white winey part.  There was something ever so slightly musty or funky there for a second on the nose just before the “oh my God!” aromas hit, like working in a glue factory, then being promoted to …heaven…or Chanel.  On the mouth, it was an improbable 70% to 35% mix of raisins and golden sultanas just as they hit the butter melting in a steel pan.  The finish was still long and slow developing and umami-laced and saliva-inducing.  As I write this, my heart hurts from remembering it so fondly and missing it so…  But as you can see, it was still coherent narrative-defying in its inimitable splendor. 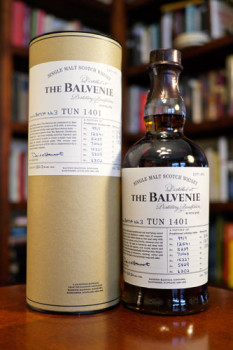 Batch #3:  We were also lucky enough to have reviewed this bad boy shortly after its release.  In that review, Bill imagined himself teaching aspiring journalists how to transform themselves from cub reporters into gloriously bohemian drinking deities who also do some writing.  During that particular seminar, we began to get an inkling of what David Stewart was up to with these expressions, and that inkling had GENIUS written all over it.  In ink. Trying this dram again in the flight led to more revelations, more pieces of the puzzle dropping into place.  We found this one creamier than the Batch #2, like a great emflowered/emfloured cream, or the best béchamel sauce ever. But 90 seconds into the mouth, the smoke hit us, but it was no normal smoke:  it was like kissing John Waters just after he’d had a cigarette the day before the day after he quit smoking.  And the finish was once again simply stunning.  We found water adds immeasurably to it:  it was like riding bareback on a springbok who was wearing Reeboks and running through Kruger National Park.  In between tears of gratitude or at the emptiness of his glass (it was hard to tell which), Bill put his finger on the pulse of that expression:  he said that Batch #3 is a Scotch that screams, “I’m a really old, great wine, but I’m better, because I’m a Scotch!”  We concluded that the Batch #3 alone was reason to grant Scotland independence.

Batch #4:  This one struck us as an awful lot like Batch #3 on the nose: Raisins.  Raisins Foster.  Raisins Poteen?  Raisins Poutine?  But then it opened up on us and the scales started to fall from our eyes, and two glorious drams in, we began to see, really see, for the first time.  We found aromas and tastes in combinations we’d never imagined:  smells of angel wings, alongside the perfumed farts of sleeping concubines; ballerina socks, a castrato’s cravat, and Calvados with ground up cloves; pickerel filets in a steel tin—really high end, officer-like pickerel; Maraschino cherries, kirschwasser, and Eastern Estonian Sclorchemwafflen; and flambéed prawns, alongside flaxseeds cracked on a platinum mortar. It was then that we finally could see where David Stewart’s brilliance was taking us: each batch seemed to us to imitate a different, amazing alcoholic beverage. It was like The Brotherhood of the Top Shelf, each batch stealing the quintessence of a wine or brandy or 40 oz. malt liquor (that was Batch #0, when the Malt Master’s home number was stolen in the News of the World phone-hacking scandal).  Once again, we found that the finish just goes and goes.  Again, it was a rather finey winey finish.  As exquisite as being in the Bodleian library reading room is for an academic.  With water, the nose improbably thumbed its nose at…itself.  It defied it (and itself) entirely.  Then came hints of white grapefruit.  Post-swallow, it lingers in your mouth with the tenacity of 85% cacao chocolates.  At this point, John stepped away for a few.  Upon returning he didn’t realize he’d been crying inside, an existential yawp of loneliest loneliness at the loss of his dram to himself.  Having incorporated it into his own being was absolutely no consolation to him. 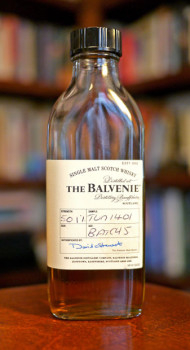 Batch #5:  This final contributor to our flight came to us via the good graces of Sam Simmons, the Balvenie Global Brand Ambassador, and some creative shipping on Stephen’s part.  And though we raised a glass to Sam and thank him here again (Thanks, Sam!  You’re the man!), we nosed this last dram and immediately began to imagine our review of it as a tribute to David Stewart and all others who ensured that the identity and integrity of the Balvenie distillery was vouchsafed through the past 50 years.  In this fourth straight Tun 1401 we found the same signature notes underlying each expression, even though each one has different top notes.  On the Batch #5, it was mint liqueur on the nose.  Or perhaps eucalyptus bitters in a wonderfully strange cocktail.  Then came the dumbfounding Carameliciousness™ of this batch:  it was so utterly breath-taking, Bill had to use a fountain pen to re-inflate my collapsed lung.  It was hotter and narrower than Batch #3 or #4, a Ticonderoga pencil Mark Twain once used to speed-write a chapter of Huckleberry Finn after it came to him complete in the middle of the night.  But then we all stumbled upon a clear anise liqueur note in there.  Was this one a nod to world-class ouzo, arak, Sambuca, or absinthe? As we debated that question, a dark horse stormed in on the finish: it was a 60 year old boutique balsamic vinegar, one taste of which instills such covetousness that had all three of us thinking of funneling the university funds set aside for our children (real or imagined) into all of the bottles of Tun 1401 we could find.

On the scale of unbelievable top liquor shelves–
The Balvenie Tun 1401 flight of Batches #2 through #5 is the top shelf in God’s personal bar–We imagine David Stewart approaching St. Peter with the first five or six batches of the Balvenie Tun 1401 in his arms and gaining immediate entry, with a multitudes of angels heralding his (and his whiskies’) arrival.