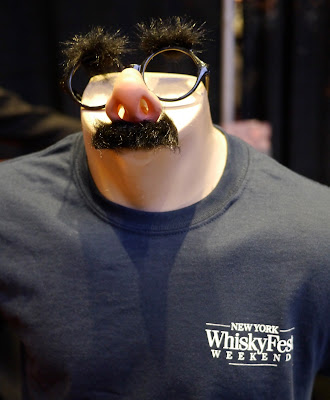 Sadly, John and Bill could not make the trip to NYC for WhiskyFest:  Bill had plans to lend his cryptography expertise to Anonymous for an assault on Justin Beiber’s website (he must be stopped!); meanwhile, John was busy aging a small amount of high-quality grain spirit in one of his bunions.  But instead of flying solo on this one, my childhood buddy David came along for the ride.  [David, it was great hanging out.  Sorry it got weird there before the night was out.  Probably should’ve thought twice before letting that shady Russian guy take us to that “club.”  At any rate, thanks for putting up with me.]
I was curious to see if the Grand Tasting at WhiskyFest NYC would be as overwhelming and huge as I had found WhiskyFest SF to be the year before.  It wasn’t.  And this was rather surprising, given that the seminars were held separately from the Grand Tastings at this event, whereas the ran concurrently in San Francisco, thinning the crowds slightly.  Perhaps two nights of Grand Tastings had this effect.  If so, I heartily endorse this change. 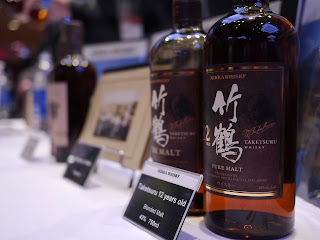 A quick note on the Saturday seminars:  I did not attend them (I did not have $325 to spare, and I was visiting my friend, David), but by all accounts, they were a big success and well worth the money.  You can find more details on the seminars here, but the four words I heard most often about the seminars were:  “Gold Bowmore” and “John Glaser”.  More on those latter two words below.
I found it easy to move around the huge room, to access the tables I wanted to visit, and to get to the food.  There was a lot of food, and really high-quality food.  I’d say that it was clearly better food than was served at the San Francisco event the year before.
If I were a newspaper reporter, though, my headline for this event would be:  “Single Cask Nation’s Coming Out Party.”  (close second:  “Single Cask Nation’s Debutante Ball”)  Seriously, though, the SCN whiskies—especially their Benriach 17 year-old—was the talk of the Grand Tasting I attended.  Joshua Hatton, Jason Johnstone-Yellin, and Seth Klaskin were swamped all night, getting the word (and the juice) out on their exciting new venture.

Another highlight for me included chatting with Compass Box founder John Glaser about the 11th release of the Flaming Heart (it’s a crackin’ great whisky, let me tell you) and the Great King Street New York Blend (also wonderful).  And the man who’d wowed the crowds earlier in the day was kind enough to don the Grouchos with me.
I was also thrilled to try some Nikka expressions new to the U.S. market and to chat with David King from Anchor Distilling about them.  Another thrill was tasting his Old Potrero Hotaling’s Single Malt Whisky—it’s brilliant.
It was also great to see that Balvenie’s Tun 1401 Batch 6 more or less made its debut at WhiskyFest NYC, and it went fast.  It’s no wonder:  John, Bill, and I have been fortunate enough to try batches 2, 3, 4, and 5, and they are right up there with the finest whiskies we’ve tasted.  Period.  And Balvenie Global Brand

Ambassador and friend Sam Simmons was also kind enough to sport the glasses for me as we chatted next to the SCN table (though I have to apologize for the fact that the lighting was less than optimal).
Other whisk(e)y highlights:  David Perkins’ High West Campfire (tasting notes coming soon); Simon Brookings’ pulling the Laphroaig PX out of his boot—and then following it with the Greenore 19 (amazing); David Blackmore pouring me a ridiculously large dram of Ardbeg Galileo; Richard Paterson talking me through the new Shackleton release; Manuela Savona introducing me to the Bowmore Dorus Mor (a.k.a. “Tempest” in the UK); 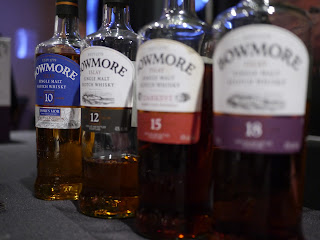 Steve Hall giving me a taste of the spectacular Balblair 1975 #2; Karen Stewart talking me through the Wemyss malts recently released in the U.S.; Charles Daucourt introducing me to the seductive French whisky called Bastille; and Steph Ridgway reuniting me with an all-time favorite and hall of famer, the Highland Park 30.

If that highlight reel of whiskies doesn’t impress you, you’re most likely a Baptist or a Mormon.  But even if you’re not, you can take that list as a clear indication of the level of goodie that WhiskyFest has to offer.

Non-whisky highlights included chatting with Whisky Advocate whisky writers Dave Broom, Dominic Roskrow, and Jonny McCormick.  If you aren’t familiar with their writing, you should be.  Actually, I’ll go you one further:  if you read us, but you don’t read them, you’re doing it wrong.

And last but incredibly far from least, the moment that made the night for me  was being photographed in full Groucho glory with the man behind the event itself, John Hansell, Publisher and Editor of Whisky Advocate.  The pic came out a tad blurry, I’m sorry to say, but it’s nonetheless a classic.

Thanks, John.  You’re a good sport and you put on one helluva whisky event.  I’ll see you next year at WhiskyFest New York, if not sooner.

-Our thanks to John Hansell and Joan McGinley from The Whisky Advocate for the press pass to the event!