[This is the fifth of five reviews (in this batch) of current offerings from the Scotch Malt Whisky Society.  Check out the beginning of this other post for more on these reviews.  If you want to find out more about the SMWS or their bottlings, visit www.smws.com] 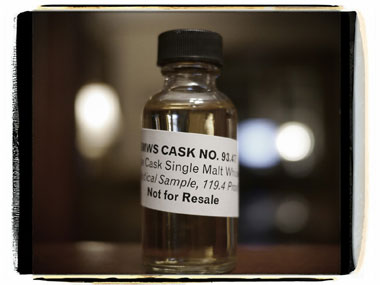 Tasting notes:
Still residing in the analytical wholly-water-of-life vial, I get tar paper shack basking in the southern sun, old anodized tin roof, and bacon boiled in carrot ginger soup. Poured into a glass, lemon grass and blackberry reduction on seared T-bone steaks derived from a calf force-fed lemon grass. Unripe cantaloupe rind sharing a tidepool with a lonely sea anemone. On the mouth, uni spiked with black peppercorns and awash in wasabi (lots of wasabi!). The finish, as I type, like Zeno’s Arrow, has yet to reach the finish line. I’m more than halfway there, and each second brings double the sensation and tortoise shell mandolin pick flavor. (You may wonder how I know the flavor of a tortoise shell mandolin pick. That’s an interesting story; let me tell you. When I was working as a merchant marine in Tulsa, Oklahoma, I first met… [Stephen: 17,000 words were redacted by the Official Malt Impostor Germane (Content) Only Device, aka OMIGOD. And you’re welcome.]
With water, grilled Chilean sea bass liberally doused in a pineapple chutney, perhaps overcooked beyond the tender flaking stage. Bath soap and loofah in a granite shower stall used by a woman allergic to scents. The mouth becomes hotter and the finish longer, like the scene in my favorite movie…[John: Redacted again. I believe that movie was banned in at least five southern states.] Rubber kitchen gloves cleaning Wedgewood china.
Accidentally adding LOTS of water to my final taste, the nose is lemon-water with mint in a kiddie pool. On the mouth, it’s sweetish like a very ripe heirloom yellow tomato or wild red pepper. The finish is muted, like Miles Davis, and iconically cool, like Miles Davis.

Rating:
–On the scale of Miles Davis albums–
The SMWS 93.47 is Round ‘Bout Midnight–If you’ve heard–and love–the album, you’ll know what this means:  Buh! Buh! Bweeee! Buh!  Man, that’s awesome, as is the John Coltrane solo that follows.