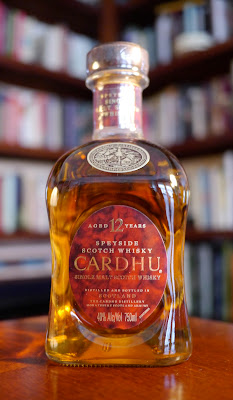 Tasting notes:
The Cardhu 12 is sort of lushy–grassy on the nose, if you were sipping it riding a unicycle along a river during the summer; but not a river that reeked rankly; rather a ravishing riveting river whose lush undergrowth shouted, “Spring has sprung! Summer is here, hey nonny nonny!” John found meatballs in rosewater, and while I can’t gainsay him that opinion, and indeed, even verify that a human could smell meatballs in rosewater…well, I’ll just call that a minority opinion. Corded wood stacked into battlements and trenchguards, aftershock on a Napoleonic battlefield with the memory of cannon-fire still clanging in one’s mind, constantly reignited by the sharp cordite smells. Watery runoff from a pink circus elephant’s afterperformance loving scrubdown from Guilietta, the only human whom he abides.
On the mouth, tangy, refreshing, and Twiggy: a model profile. [John: Bill! That’s ‘twiggy’ as in ‘tastes like twigs,’ not ‘Twiggy,’ as in the model!] It’s light, like a titanium and balsawood model airplane or a forgettable weekend romance. With a ferret whom you’d be ashamed to bring home to meet Mater and Pater. [Stephen: Bill! Enough with the ferrets!] Fine, it’s like sucking on a Tootsie Roll™ that explodes into a Pop Rocks™ mini-frenzy, which quickly cools and slowly oozes down my throat like ‘a’ā (slow lava, for you non-vulcanologist, non-native-Hawaiian, non-Scrabble™ players). And then: clean and powdery-floral, like the reality depicted in a talcum-powder ad.
At 80 proof, it’s a lovely swig and a gulp, and we wondered to each other what a cask-strength release would be like. How would it differ? Even at 86 proof, would that extra 7.5% of proofiness bring a little street cred, much like when Justin Timberlake braided his hair into cornrows? On other tangible intangibles, the bottle is really distinct: decanter-like, a tesseract lost in Euclidean 3-space morphing into a Kingdom of Crystal Skulls.

Rating:
–On the scale of easy-listening awesome 70’s pop music–
The Cardhu 12 is the Eagle’s Greatest Hits–While watchin’ another Tequila sunrise, I got a peaceful easy feelin’, like I been out ridin’ fences for so long now, takin’ it easy while takin’ it to the limit, and drinkin’ a glass one more time.