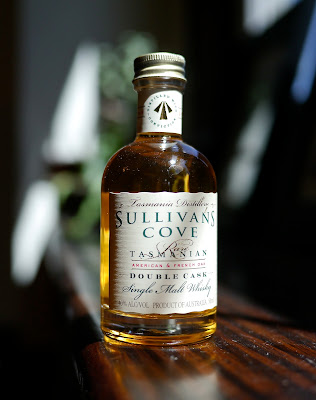 Tasting notes:
The nose on this dram is woody, but in a slippery way, like a greased elm slide carved from a giant tree in one piece so you never have to go against the grain.  There are also hints of cheese here, though not just any cheese:  this is yak cheddar rennet, or maybe pepper jack where Thai chili are the peppers.  If the two seem too far apart, it’s like it is with a lot of other things: one man’s yak rennet is another man’s pepper jack.  Whatever oiliness is present on the nose is replaced by a wateriness on the mouth.  But it’s wateriness reminiscent of runny, yummy, rummy grog.  It’s probably a product of the American and French Oak barrels combined, but it feels more to us like this dram came from a rum cask, but not just any rum cask:  this is the cask that the captain poured his special stash into as the mutinous uprising began, only to find later that the chef had also stored mangoes and bacon fat in the bottom of that particular barrel.  Hold it in your mouth, and the sugar that comes across first as rum transforms into marzipan, but not just any marzipan:  this is a marzipan koala bear–with small, beady, untrusting licorice eyes that stare into you like a Nietzschean abyss until you hear the voice echoing from the depths, “I’m a marsupial, not a bear, dammit.”  On the finish, more fruit, but its exact quality is hard to pin down, much like the fruit our marzipan friend juggles as he makes his way along the tightrope stretched across the yawning chasm.  That’s right:  we’re talking languid, lethargic lobbing of limes, lychees, and lingonberries whilst whistling past the forboding depths of meaninglessness.  What could be better (I mean, after you’ve faced reality)?

Rating:
–On the scale of animals with misleading names–
The Sullivans Cove Double Cask is the wombat–neither bat nor stand-alone womb, this muscular little Australian quadruped turns out to be incredibly adaptable when it comes to tolerance for different kinds of habitat.  That means it’ll fare remarkably well in your liquor cabinet, even if it’s in the northern hemisphere.

–Our thanks to Raj and Purple Valley Imports–and Sullivans Cove Whisky–for the sample!