[This is one of many shorter reviews we’re posting on current Scotch Malt Whisky Society offerings (with Lo-Mob effects on the pics).  Check out the beginning of this other post for more on these reviews.  If you want to find out more about the SMWS or their bottlings, visit www.smws.com] 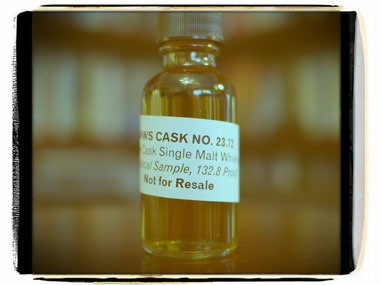 Tasting notes:
Distinct notes of port and rum raisins greet me on the nose to this dram.  Porting a bottle of port to my porthole to look out on the port side whilst I cruise into port.  Yes, I know it’s a refill sherry butt and not a port cask!  But I get PORT, okay?  Plus, I did the whole sherry thing already–yesterday!  OK, so moving on to the mouth, it’s a little more sherry…but only the port parts you can pull out of sherry.  Now that I say it, how in the world did they do that?  I don’t know, but I have it on good authority (not to mention personal experience) that the dude behind this operation has mad skillz, yo.  But I digress.  It’s not nearly as hot on the mouth as its youth or 132.8 proof would lead one to believe.  Instead, it merely fires off a billowing explosion– not unlike throwing an aerosol can in a campfire (What do you mean, I’m not supposed to do that?) –of spice laced with sweetness and ripe purple fruits across the back half of my tongue.  The finish has a distinct tang, neither acrid nor sour, just tang.  Like a porcelain bell ringing TANG!  What a spitfire this dram is, all without spitting any real fire.  At first, I was tempted to say it’s one dimensional, but once I went back and chewed on it further, there are a number of distinct flavors here–and they make a difference.


Rating:
–On the scale of medieval cool stuff–
The SMWS 23.72 is the portcullis–Not something I would have picked out when I was younger (that would have been the morning star, followed closely by chain mail armour), but pretty cool when, as a more mature person, I really stopped to think about it.  There’s a lot of killer engineering going on here, especially for the time.