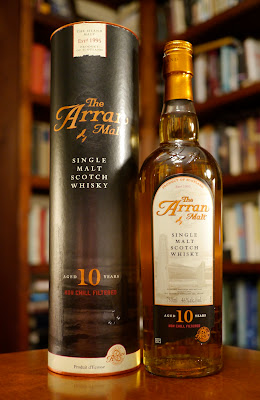 Tasting notes:
The Unchill-filtered Arran Malt 10 year old’s opening salvo is unripe pluot butter slathered on the holystoned-ammonia-decks and begrimed porcupine leather boots of French pirate Montbars the Exterminator. That, and melted Heath bar sieved through a stolen silk and beaver bowler into a djembe commandeered from a Spanish vendor of lemons and wormy crabapples. Dispatching Spaniards on the main is no longer a family tradition, so Montbars’ lineal male descendent writes catalogue copy for hand cream, lemon butter, and candied persimmons for the Vermont Country Store® using an IBM Selectric™ typewriter and printer’s ink. Roundness of oranges, oblateness of mangoes. Man’s graves in mangroves with mangoes? I intuit an Inuit is in it?
And bourbon casks, but not Louis Bourbon casks, half-filled, the Angel responsible for the share spending its time on a transatlantic love cloud before returning to heaven. Peccadilloes of the angels, armadillos of the devils, amontillados of the Venetians, vendettas of the papayas, peyote buttons of the Yaquis. [Stephen: ‘Vendettas of the papayas’?!?] A honey vanilla Häagen Dazs sundae coated in pineapple topping with reduction of Windex™ base.
The finish induces tinnitus or, better yet, tintinnabulations: Is it live or is it my memory? Hard cider jack, biltong hardtack, the vinyl off-gassing schmutz is scared from the concave interior of my windshield, wiper blades rasping uselessly in a sandstorm. Rumpelstiltskin spinning straw into malterrific gold. Penelope weaving a tapestry to baffle the unwanted suitors. John knitting Amish afghans out of shed Angora fur collected by trained lemurs. Dew-drops on walnuts in a mezzotint executed by deceased Japanese National Living Treasure (when he was alive) Yozo Hamaguchi.

Rating:
–On the scale of actor’s real names–
The Unchill-filtered Arran Malt 10 year old is Herbert Lom–Best known for playing the tic-bespasmed police prefect nominally overseeing Inspector Clouseau, he was born in Prague of Austrian nobility, and his real name was Herbert Karel Angelo Kuchacevic ze Schlunderpacheru. The Arran is equally loaded for bear.