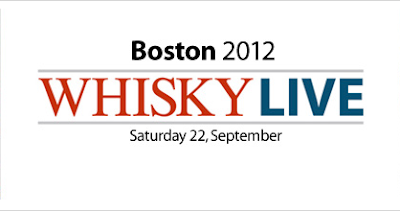 [As this was the inaugural WhiskyLive Boston, we thought it warranted a detailed review, so we provided two (!), along with a duly terse bit to tie up loose ends. And next time we’ll work on photographing more whisk(e)y…] 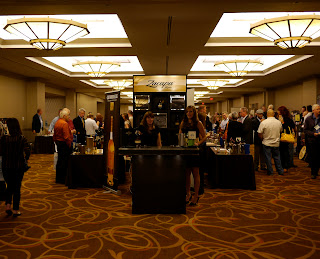 Bill:  My first sense is how well it was run, and how pleasant, friendly, and knowledgeable everyone was. Then I saw the chocolate table.  [Stephen:  The chocolate table was right inside the door, and Bill went straight to it first.] Taza Chocolate had a trio of samples (Vanilla, Ginger, and Salted Almond, not that I had several of each), I knew I was in the right place for a Saturday night.
I’ve had the opportunity to try many whiskies, so I decided to cherry-pick amongst those that I haven’t had, or haven’t had while sober. Standouts include the Jefferson Presidential Select 18 years old, and Reader, I married him. Wait! I mean, yes, I liked it enough that I bought a bottle…my need for that syrupy corn flavor grows and grows. After getting a taste of that, I sampled the 18-year old Johnny Walker Gold and the Ageless Johnny Walker Blue. Next up were a few Irish whiskies, with Emily Duffy from Kilbeggan. They also were delicious, and helped me realize an essential point: At one time, I was a wine connoisseur, and grew to appreciate whatever a glass brought me, and now, like someone falling in love who sees only the good parts, I’m in love with whisk(e)y. Every glass brings something wonderful and I love them all. If I could adopt distilleries like children, I would. If I could shower in whisk(e)y, and let it rain from the skies, I would. (See? I’m sappy in love with the stuff.) [Editor’s note:  This claim is false: Bill can still slag on a bad whisky with the best of them, but this flower-child-esque attitude toward all things whisky as he writes this simply reflects the amazingly positive frame of mind even recalling this event engenders in him.] 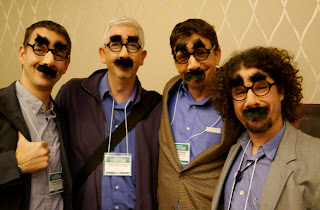 Another highlight for me was Glenlivet. It’s easy to overlook the Glenlivet in today’s overflowing cornucopia of finished, flavor-explosionalicious drams. However, upon a quiet sampling, I was struck by how perfect a whisky it is. So smooth, so clean, so damnably drinkable, and utterly delicious. The Nadurra is their richest and most flavorful whisky, and even it can’t but help announce its suaveness with every sniff and sip. It was also a pleasure meeting Raj from Purple Valley Imports, and finally getting to try two of the Amrut whiskies. I’d seen them in stores, and the glory of an evening like WhiskyLive is that rather than just pony up $70 or more to try one new dram, you pony up a tad more than that, and instead get to try a dozen new (and, in this case, revelatory) drams.
At the Classic Malts master class, Gregor Cattanach, the National Master of Scotch Whisky, memorably summed up the yeast life-cycle as “eating sugar, having sex with itself, then dying of alcohol poisoning.” John and I, and the Whisky Bitch (who sat next to us) all turned pale. Maybe it hit too close to home? Gregor led us through a truly lovely array of whiskies, including the Oban 18, the Talisker 10, and the Lagavulin Distiller’s Edition. My next class was The Glenlivet (again!). What can I say? I really enjoyed it, and was glad I’d signed up. This time, Craig Bridger started us off at The Glenlivet 12 and leisurely worked us all the way to the XXV. Along the way, I learned a lot I hadn’t known, most particularly why the “The” in front of the “Glenlivet.” 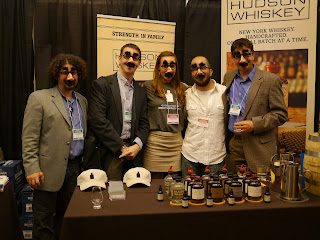 It was a blast to meet other admirers and purveyors of whisk(e)y, and especially terrific to see Gable Erenzo of Tuthilltown Spirits again, too. I wish I’d rolled like a horse in a meadow in the many fine whiskies they’d brought, but since I’d had the pleasure of touring there in the past with my fellow Impostors, I saved my palate and sensibilities for drams new to me.

John:  We’ve been to several large-scale whisky events like WhiskyLive, so we’re in a position to make comparisons among them.  The comparison first.  WhiskyLive made its first appearance in Boston, and how welcome it is!  The ballroom or conference site setting is familiar, as is the chance to experience more whiskies than you could possibly enjoy in a single night.  But one noteworthy contrast: there was something about the relaxed pace of the evening that made this event quite memorable.  With nearly 5 hours to spend, it is possible to hold special master classes concurrent with the main event.  That, along with the fact that it was also less crowded than other events have been, meant it was possible to linger a while at the different booths. 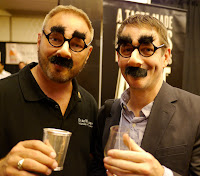 Another thing that set this event apart was the breadth of the offerings.  To begin, there were beer offerings.  Samuel Adams was on hand pouring, among other things, the remarkable Sam Adams Utopia.  It comes in its own, golden pot still–or so the bottle appeared–and has been aged in first-fill Buffalo Trace bourbon barrels.  At $150 a bottle, the try-before-you-buy approach that this event makes possible is great.  There were also chocolate offerings (I seem to have lost Bill…  Oh, right, there he is.).  Another booth offered an exciting array of whisk(e)y cocktails, and you could vote on your favorite.  However, my ballot was defective: it did not have “(e) all of the above” and a space for my shipping address on it.  Some of the craft distillers had aged rum on offer (a favorite of mine ever since my trip to Barbados), and there were whiskies from Ireland, India, Canada, and even Barrington, Massachusetts.  Finally, the chance to try single cask or unusual independently-bottled expressions was worth the price of admission alone.  One of my very favorites was the Parker’s Golden Anniversary Bourbon.  I’m not sure it’s available anywhere.  I’m not sure I could afford it if it was.

WhiskyLive was a tremendous opportunity to introduce yourself to new whiskies (Hey, Tyrconnell Sherry Finish / I know it’s crazy / Here’s my number / Call me maybe), reacquaint yourself with old friends (there are so, so many…), or resume torrid love affairs with that very, very special dram (Lagavulin D.E… how you doin’?).  Oh, and there are wonderful people as well.  Bernie Lubbers from Heaven Hill–thanks for taking so much time to share your passion for bourbon with us.  Jason Johnston-Yellin (of Guid Scotch Drink)–great to meet you at long last, and best of luck with the imminent Single Cask Nation roll out.  And your partner Yossi Hatton–you, sir, are one of the warmest and funniest people I know; and so with apologies to the poet, a Single Cask Nation turns its thirsty eyes to you.  [Name redacted] from Philadephia–when you said you were a collector of more than 700 bottles and that we three were invited to visit your home to drink with you, I thought I was dreaming; when your kind email arrived a day or two later with both an invitation and an inventory, I knew I was dreaming!  Thom from Whisky RI–great to see you enjoying your first large whisky event.  Best of luck with your monthly tastings in the Providence area: the one I attended was great.  Bozzy (of tire-bouchon)–running into you at the end of the night was tremendous; it felt like we were all old friends (and if we actually already are old friends, then I really did have more of the Glenglassaugh 26 than I should have.)  Lastly, Gable Erenzo from Hudson whiskey–you are the impresario of all impresarios.  We are continually indebted to your genial warmth and generosity.  (P.S., that gin of yours is craaaazy good.)

Stephen: For fear of driving our readers to commit seppuku, I’ll keep my part brief.  I second the overall sentiments about the event:  very well run, very comfortably and leisurely paced with a very manageable number of attendees (and the ticket system for pours keeps it from being a drunk fest), a nice spread of high quality food, and a wide selection of whiskies and other tasty offerings.  Oh, and the band was really solid, too.
It was great seeing/meeting all of the people Bill and John mentioned, but I’ll add to that list (in no particular order): 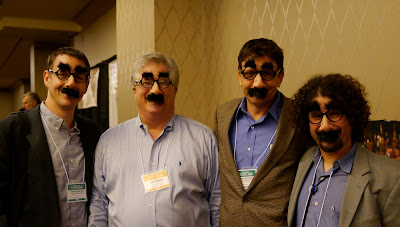 Overall, Jeff Connell and his crew put on a great event–and doing it on a Saturday was perfect.  We are already looking forward to next year’s event.  Of course, we have WhiskyLive New York to help us get through until then…